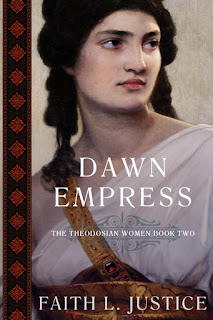 Synopsis: A calculating court. An empire at risk. With her child brother the new emperor, will her family survive his reign?

Constantinople, AD 408. Princess Pulcheria is terrified for the future. With her father’s death leaving her seven-year-old brother as the new ruler, the astute girl fears the easily influenced boy will be destroyed by the whims of a manipulative aristocracy. Vowing to protect their family legacy, the young noble convinces the underage monarch to appoint her as the imperial regent.

Defending herself from duplicitous suitors, Pulcheria and her sisters escape marriage with a shocking vow, garnering favor with the people of Constantinople. But after her sibling comes of age, his ambitious wife and foolish support of heretics threaten to undo her plans to secure the empire’s sovereign authority.

Can this shrewd young princess outmaneuver a palace filled with greedy, power-hungry men?

My Review: Dawn Empress tells the story of Galla Placidia’s niece, Pulcheria. At the young age of fifteen, Princess Pulcheria took a vow of virginity in order to be a regent to her younger brother, Theodosius II. Throughout her reign as regent, Pulcheria was beset with challenges. She had to protect her brother from assassins and corrupt eunuchs. Pulcheria had to confront raiding barbaric tribes and religious turmoil. Most of all, Pulcheria found Athenais, her brother’s new wife, as her new political rival. Can Pulcheria still manage to hold onto power through all these difficulties?

In history, Pulcheria was known for being a regent to her younger brother, Theodosius II. When Theodosius II came of age, she became his co-ruler. After his death, she married his successor Emperor Marcian and became his empress. Their chaste marriage lasted three years when Empress Pulcheria died. With these known facts, I was curious to see how Mrs. Justice portrayed Empress Pulcheria, and I found her portrayal to be fascinating. Pulcheria is ambitious. At times, she can be ruthless. She is also very judgmental. Yet, she loves her family and her kingdom. She believes ruling is God’s will. She is very pious and devotes her life to God and her people. She is the Church’s champion and fights against heretics. She also puts the interests of the people first. She is also a courageous leader, and her bravery instills inspiration to her people amidst their darkest hour. Therefore, Pulcheria was a strong, wise, and capable leader. I could see why she won the admiration and respect of her family, people, and church. This novel showed why she became a saint.

Overall, this novel is about family drama, religion, and political intrigue that will captivate you from the first page until the last. I found all the characters to be realistic and complex. I liked Pulcheria’s relationship with her brother, Theodosius II, which is the main focus of the novel. While they often are in conflict and do not see eye-to-eye on certain issues, ultimately, they respect and rely on each other. They are each other’s strength. The author did an excellent job in making the Byzantine court come alive. This does not mean that the novel did not have its drawbacks. Dawn Empress can move at a slow pace and some of the drama reads like a teen soap opera. Still, Dawn Empress rescues an obscure empress from history! I can’t wait to read the last book in Theodosian Women with the final installment focusing on Aelia Eudocia! I recommend this for fans of Queen of the Darkest Hour, Queen of Oak, and I Am Livia!