The Great Mrs. Elias by Barbara Chase-Riboud: A Book Review 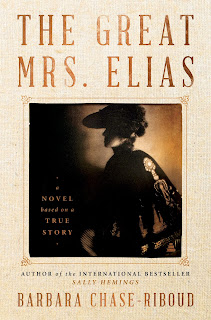 Synopsis: The author of the award-winning Sally Hemings now brings to life Hannah Elias, one of the richest black women in America in the early 1900s, in this mesmerizing novel swirling with atmosphere and steeped in history.

A murder and a case of mistaken identity brings the police to Hannah Elias’ glitzy, five-story, twenty-room mansion on Central Park West. This is the  beginning of an odyssey that moves back and forth in time and reveals the dangerous secrets of a mysterious woman, the fortune she built, and her precipitous fall.

Born in Philadelphia in the late 1800s, Hannah Elias has done things she’s not proud of to survive. Shedding her past, Hannah slips on a new identity before relocating to New York City to become as rich as a robber baron.  Hannah quietly invests in the stock market, growing her fortune with the help of businessmen. As the money pours in, Hannah hides her millions across 29 banks. Finally attaining the life she’s always dreamed, she buys a mansion on the Upper West Side and decorates it in gold and first-rate décor, inspired by her idol Cleopatra.

The unsolved murder turns Hannah’s world upside-down and threatens to destroy everything she’s built. When the truth of her identity is uncovered, thousands of protestors gather in front of her stately home. Hounded by the salacious press, the very private Mrs. Elias finds herself alone, ensnared in a scandalous trial, and accused of stealing her fortune from whites.

Packed with glamour, suspense, and drama, populated with real-life luminaries from the period, The Great Mrs. Elias brings a fascinating woman and the age she embodied to glorious, tragic life.

My Review: The Great Mrs. Elias is a biographical novel of Hannah Elias. Hannah Elias was one of the richest black women in America in the early twentieth century. Because of her light tan skin, she could pose as a Cuban. However, the truth of her past comes to light when she becomes embroiled in a murder. Hannah could lose everything that she had worked so hard to gain.

Hannah Elias is a tragic character. Her life was hard from the start. Her real name was Bessie Davis, and she came from poverty. When she was ten years old, her father used her to increase his monetary interests. Later her family abandoned her, and she was forced to find work in a brothel. Bessie Davis yearned to rise out of poverty and make a better life for herself. She decided to move to New York City. She changed her name to Hannah Elias and hid her black identity. She was ambitious and clever. She was also a shrewd businesswoman. Thus, Hannah Elias is a fascinating character, and I could not stop reading to find out what happened to her at the end.

Overall, this novel illuminates the life of a truly forgotten and scandalous woman. The novel is very well-written with realistic characters. One of the best features is the setting of New York City. The author did an excellent job in showing both the grittiness of the poor sections of the city and the lavish lifestyle of the city’s elite. The Great Mrs. Elias reads like a thriller because it begins with a murder and tells the story of a woman is on the verge of losing everything she had worked so hard to build for decades. Therefore, this was a compelling novel that I quickly devoured in one sitting because Hannah’s fate captivated me from the first page. Thus, The Great Mrs. Elias is a must-read for fans of true crime and anyone interested in learning about prominent but largely forgotten black women in the United States. I recommend this novel for fans of On Black Sisters Street, Passing, and Ruby!