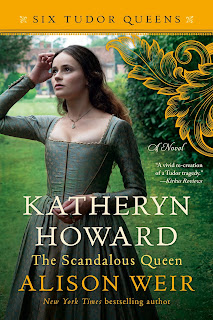 Synopsis: Bestselling author and acclaimed historian Alison Weir tells the tragic story of Henry VIII’s fifth wife, a nineteen-year-old beauty with a hidden past, in this fifth novel in the sweeping Six Tudor Queens series.

In the spring of 1540, Henry VIII is desperate to be rid of his unappealing German queen, Anna of Kleve. A prematurely aged and ailing forty-nine, with an ever-growing waistline, he casts an amorous eye on a pretty nineteen-year-old brunette, Katheryn Howard. Like her cousin Anne Boleyn, Katheryn is a niece of the Duke of Norfolk, England’s premier Catholic peer, who is scheming to replace Anna of Kleve with a good Catholic queen. A flirtatious, eager participant in the life of the royal court, Katheryn readily succumbs to the king’s attentions when she is intentionally pushed into his path by her ambitious family.

Henry quickly becomes besotted and is soon laying siege to Katheryn’s virtue. But as instructed by her relations, she holds out for marriage and the wedding takes place a mere fortnight after the king’s union to Anna is annulled. Henry tells the world his new bride is a rose without a thorn, and extols her beauty and her virtue, while Katheryn delights in the pleasures of being queen and the rich gifts her adoring husband showers upon her: the gorgeous gowns, the exquisite jewels, and the darling lap-dogs. She comes to love the ailing, obese king, enduring his nightly embraces with fortitude and kindness. If she can bear him a son, her triumph will be complete. But Katheryn has a past of which Henry knows nothing, and which comes back increasingly to haunt her—even as she courts danger yet again. What happens next to this naïve and much-wronged girl is one of the saddest chapters in English history.

My Review: Katheryn Howard is the fifth wife of Henry VIII. In this new novel, Mrs. Weir chronicles Katheryn Howard’s short life from her early beginnings to her tragic death. Katheryn Howard is from an impoverished but noble family. She longs for love. When two handsome men confess their love for her, she gives them her heart. When she becomes a lady-in-waiting to Queen Anna of Kleve, she catches the eye of Henry VIII. Shortly afterwards, she marries him. As queen, she falls in love with Thomas Culpepper. Katheryn tries to keep her romance with Thomas Culpepper and her past a secret. Katheryn fights to hold onto all that she holds dear at the cost of her own life.

Katheryn is not a likable character. She seems to be a selfish character. She does not realize that her actions hurt others. She makes many foolish decisions and does not have any common sense. I find it odd that she did not learn her lesson from Anne Boleyn. Therefore, I had no sympathy for Katheryn Howard. This is because the novel shows that it was Katheryn herself who caused her own downfall. Katheryn also was unprepared as queen and did not seem to be a good queen. She does not seem to want to establish a close relationship with her stepchildren. Instead, she seemed interested only in pretty clothes, jewels, and dancing. Thus, Katheryn does not take her queenship seriously but only uses it to pursue her own personal pleasure.

Overall, this story is about betrayal, secrets, and trying to conceal one’s past. Out of all the Six Tudor Queens series, this is the worst. The characters are very flat and many of their actions do not make sense. For instance, why would Jane Rochford help Katheryn Howard make clandestine meetings with Thomas Culpepper? What was her own gain? The book does not explain her motivations. The writing of the book is very stilted and some lines were so awful that I laughed. Also, there were many repetitive scenes and the story was very drawn out. Thus, this novel seemed more like a rushed first draft hoping to meet a certain deadline. Mrs. Weir is usually an experienced writer that is known for meticulous details and attention to history. Her books, both nonfiction and fiction, are usually a treat. However, this was not her best work, and I expected more. I recommend this for those fans of Tudor Queens. However, I find The Rose Without A Thorn, The Boleyn Inheritance, and The King’s Rose to be far superior historical retellings of Katheryn Howard’s life.

This is a video of Alison Weir talking about the fifth book in the Six Tudor Queen series, Katheryn Howard, The Scandalous Queen: