The Duke and I: The Princess of Blackmare (Liji Chronicles #1) by Veronica Skye: A Book Review 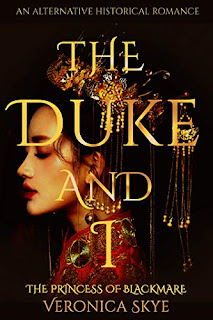 The Duke and I: The Princess of Blackmare (Liji Chronicles #1)
Author: Veronica Skye
Genre: Historical Fiction, Romance
Publisher: Veronica Skye
Release Date: 2019
Pages: 122
Source: Netgalley/Publisher in exchange for an honest review/
Synopsis: The Duke wants me. I must fulfill the duty to my country.

But there is more to me than meets the eye.

It was 672 BC and the Central Kingdom had been divided into over a hundred of warring fiefdoms. The army of my country, Lirong, perched high on top of the secluded Mount Blackmare had been miserably defeated by the invading army from the State of Jin, one of the biggest states of all with a Duke that was ready to crown himself King.

The Duke demanded not only compensation in foodstuff and livestock from my father, the Baron of Lirong, he also wanted beauties from Lirong to decorate his court. When his eyes landed on my younger sister and I, I knew my opportunity for revenge had come.

Amid the chaos in the war-torn state of Lirong, I prepared carefully for my long and assiduous journey from Lirong to Jin with the help of my childhood sweetheart. Us, weaklings compared to the beasts from Jin, were going to turn their country upside down. I would use not only the advantage of my unrivaled beauty, but also my incredible wit to make the Duke of Jin succumb.

Read the book to take this amazing and dangerous journey with me in the beautiful landscape of Northwestern China, where the beginning of the Great Wall of China was starting to form.

I have written a few biographies on women of the Spring and Autumn period, including Princess Liji for the History of Royal Women website. When I learned that there was a historical fiction series on Princess Liji, I was excited to pick this book up. I wanted to see if Ms. Skye attempted to rehabilitate Princess Liji’s reputation or show her as the evil woman she has been traditionally portrayed. In this first installment, I found Princess Liji to be a very fun character. She was lively, tough, and very clever. She was manipulative only when it came to protecting her loved ones. Therefore, I am excited to see how Princess Liji will be portrayed in future books!

Overall, this novel was a fast-paced adventure filled with action, adventure, and secrets! I thought Ms. Skye did an excellent job in introducing the characters because they will play a larger role in Princess Liji’s action in future installments. Mrs. Skye also did a fantastic job in making Ancient China come alive and made the complicated era of the Spring and Autumn period to be very comprehensive for the general reader who knows very little about the time period. My only complaint about the book was that it was a short read and wished it was longer to make it a full-length novel. Nevertheless, it was very well-written, and it ended in a cliffhanger! This made me eager to pick up the sequel and continue the series! The Duke and I: The Princess of Blackmare was a refreshing historical fiction read because it was not set in Europe! I recommend this for fans of Moon in the Palace, Spirit’s Princess, and The Cold Palace!