The Empress by Laura Martinez-Belli: A Book Review 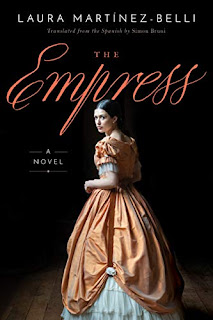 Source: Netgalley/Publisher in exchange for an honest review/

Synopsis: From a bestselling author in Mexico comes her English-language debut—an enthralling historical novel about the tragic reign of Empress Carlota of Mexico.

It’s 1863. Napoleon III has installed a foreign monarch in Mexico to squash the current regime. Maximilian von Habsburg of Austria accepts the emperor’s crown. But it is his wife, the brilliant and ambitious Princess Charlotte, who throws herself passionately into the role. Known to the people as Empress Carlota, she rules deftly from behind the scenes while her husband contents himself with philandering and decorating the palace.

But Carlota bears a guilty secret. Trapped in a loveless marriage, she’s thrown herself into a reckless affair. Desire has blinded Carlota to its consequences, for it has left her vulnerable to her sole trusted confidante. Carlota’s devious lady-in-waiting has political beliefs of her own—and they are strong enough to cause her to betray the empress and join a plot to depose her from the throne. As Carlota grows increasingly, maddeningly defenseless, both her own fate and that of the empire are at stake.

A sweeping historical novel of forbidden love, dangerous secrets, courtly intrigue, and treachery, The Empress passionately reimagines the tragic romance and ill-fated reign of the most unforgettable royal couple of nineteenth-century Europe during the last throes of the Second Empire.

My Review: The Empress tells the tragic story of Empress Charlotte (Carlota) of Mexico. The novel begins when the French have occupied Mexico. Emperor Napoleon III wants a European prince to rule Mexico. He has chosen Maximilian, Archduke of Austria, to be the new Emperor. Maximilian accepts and relinquishes his right to the throne. Once Maximilian and his wife, Carlota arrive in Mexico, they want to make their new home resemble the European palaces. However, Carlota becomes the unofficial ruler of Mexico, while her husband busies himself in the palace. As Carlota hopes to be a great empress to Mexico, she has no idea that there lies a conspiracy that plots to depose both her and her husband from the throne.

Carlota was truly a tragic empress. She was once a hopeful Belgium princess who was immediately smitten with Archduke Maximilian because he seemed sentimental and poetic. As soon as she married him, her delusions about him were shattered when she realized that he never loved her. Throughout her long marriage, Carlota yearned for his love but she never received it. She took her duty as Empress of Mexico very seriously and was a capable empress. Therefore, her descent into madness was truly tragic because Carlota went through so much and lost everything dear to her including her sanity. I sympathized with her very much and cried as I slowly watched her experience each personal blow. She had no one she could rely on, and she was truly a lonely empress.

Overall, this novel is about freedom, betrayal, and conspiracy. I thought Carlota was the only developed character in the novel, however. I did not like Constanza, Carlota’s lady-in-waiting, because she did not seem to have a will of her own and was mostly a witless pawn for Benito Juarez. I also thought Phillippe proved a useless character, and I did not know why there was a lot of focus on him. As for the other characters, they were bland and forgettable. The story is not chronological and makes random time jumps. I found these random time jumps to be very confusing and it took a few re-reads to understand what was going on. Therefore, the story would have worked better had it been told in a chronological order. Despite these flaws, The Empress read like a thriller as we watched Empress Carlota slowly descend into madness! The Empress tells the tale of a foreign empress who decided to take the throne of a country that never welcomed her and wanted her gone. I recommend this novel for fans of The Accidental Empress, Last Queen, and A Most English Princess!