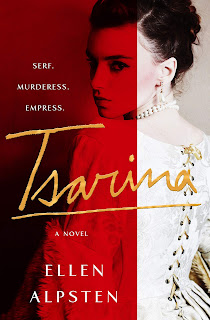 St. Petersburg, 1725. Peter the Great lies dying in his magnificent Winter Palace. The weakness and treachery of his only son has driven his father to an appalling act of cruelty and left the empire without an heir. Russia risks falling into chaos. Into the void steps the woman who has been by his side for decades: his second wife, Catherine Alexeyevna, as ambitious, ruthless and passionate as Peter himself.

Born into devastating poverty, Catherine used her extraordinary beauty and shrewd intelligence to ingratiate herself with Peter’s powerful generals, finally seducing the Tsar himself. But even amongst the splendor and opulence of her new life―the lavish feasts, glittering jewels, and candle-lit hours in Peter’s bedchamber―she knows the peril of her position. Peter’s attentions are fickle and his rages powerful; his first wife is condemned to a prison cell, her lover impaled alive in Red Square. And now Catherine faces the ultimate test: can she keep the Tsar’s death a secret as she plays a lethal game to destroy her enemies and take the Crown for herself?

From the sensuous pleasures of a decadent aristocracy, to the incense-filled rites of the Orthodox Church and the terror of Peter’s torture chambers, the intoxicating and dangerous world of Imperial Russia is brought to vivid life. Tsarina is the story of one remarkable woman whose bid for power.

My Review: Catherine I of Russia was a woman of humble beginnings who rose to become Peter the Great’s second wife and later ruled in her own right as Empress Regnant of Russia. Yet, despite her fascinating and unlikely rise to the Russian throne, very few have ever dared to tell her story, as much focus has been on her granddaughter-in-law, Catherine the Great. In Tsarina, Catherine tells her own story-from her life in poverty as a serf in Estonia to the moment she takes the throne as Empress Regnant of Russia. Tsarina also shows a strong woman who overcomes much tragedy to become the most powerful woman in Russia.

Even though Catherine is the narrator and is the central figure of the novel, she often feels like an anti-heroine. If she was a character in a fairytale, she would play the role of The Evil Queen. Therefore, I disliked Catherine throughout most of this novel and saw her story more as a villainess’s story than as a heroine. I found Catherine to be very tough and strong-willed. She also loved her step-son and tried her best to protect him from his abusive father. Catherine is also very loyal to her friends. Yet, throughout the novel, Catherine does many cruel and wicked deeds. Some of those wicked deeds were so appalling that it made me want to put down the book and not read any further. I often wondered if I should continue reading her story. After I took a long break I resumed my reading, but still feeling sorry for those women she had hurt.

Catherine was not only ruthless, but she also was very vain, conniving, and often made many foolish decisions. Catherine is a dominant character until she meets Peter the Great, then she becomes mostly passive. Catherine and Peter’s relationship is the heart of the novel, but I did not like it. Peter is a dislikable character. He is very selfish and abusive. I hated how he abused his first wife and eldest son. I did not know why Catherine stayed with him  when he treated her so horribly. I don’t believe she loved Peter, but stayed with him for riches and power. I also do not see what he saw in Catherine. The novel does not explain Peter’s motivations. Even though Peter married Catherine and crowned her as his empress, I do not believe he loved her. Instead, he seemed to want a woman who was totally submissive to him and whose life solely revolved around him. Thus, Peter was my least favorite character in the novel and after finishing the novel, my first thought was I understood why his grandson, Peter III and his great-grandson, Paul I turned mad. They obviously inherited their madness through Peter the Great.

Overall, this novel is about passion, greed, and betrayal. The political intrigue you would normally find in a historical fiction novel about royalty is nonexistent in Tsarina because it focuses on the personal lives of Catherine I and Peter the Great. The supporting characters are all bland and mostly seem to be in the background. This is very sad that they are not given much attention because two of them are key supporters of Catherine’s rise from Empress Consort to Empress Regnant of Russia. However, we do not know why they would risk their lives to support her. We do not know the decisions that led Catherine I to claim the throne. I wished that instead of the novel spending most of the time on the relationship between Catherine and Peter, it would spend more time on how Catherine took their throne as Empress Regnant of Russia and her brief reign. With the focus being on how Catherine obtained power, it would flesh out the supporting characters in more detail because it would give them more of a role and personality. The lush setting is the novel’s strength. It shows the grittiness of the town of Marienburg to the glamorous court of Russia. Tsarina was also a hard read because it had many graphic scenes that made me uncomfortable for me to read and made me unwilling to pick up the book. The graphics scenes made the novel repetitive, and I found many of them unnecessary in Catherine’s story. Still, this book portrays Catherine to be a compelling historical figure, and it made me wish that there was a biography on her instead of just a Wikipedia article and more novels written on her. The novel still leaves me curious to pick up the sequel The Tsarina’s Daughter, which focuses on Elizabeth, Empress Regnant of Russia. Tsarina shines a spotlight on an often overlooked and forgotten woman! I recommend this for fans of The Winter Palace, The Romanov Empress, and The Summer Queen!