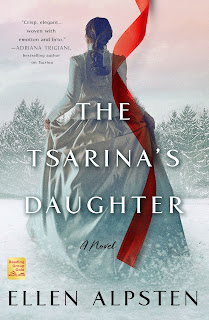 Source: This book was given to me as part of a blog tour in exchange for an honest review/

Synopsis: Ellen Alpsten's stunning new novel, The Tsarina's Daughter, is the dramatic story of Elizabeth, daughter of Catherine I and Peter the Great, who ruled Russia during an extraordinary life marked by love, danger, passion and scandal.

Born into the House of Romanov to the all-powerful Peter the Great and his wife, Catherine, a former serf, beautiful Tsarevna Elizabeth is the envy of the Russian empire. She is insulated by luxury and spoiled by her father, who dreams for her to marry King Louis XV of France and rule in Versailles. But when a woodland creature gives her a Delphic prophecy, her life is turned upside down. Her volatile father suddenly dies, her only brother has been executed and her mother takes the throne of Russia.

As friends turn to foes in the dangerous atmosphere of the Court, the princess must fear for her freedom and her life. Fate deals her blow after blow, and even loving her becomes a crime that warrants cruel torture and capital punishment: Elizabeth matures from suffering victim to strong and savvy survivor. But only her true love and their burning passion finally help her become who she is. When the Imperial Crown is left to an infant Tsarevich, Elizabeth finds herself in mortal danger and must confront a terrible dilemma--seize the reins of power and harm an innocent child, or find herself following in the footsteps of her murdered brother.

Hidden behind a gorgeous, wildly decadent façade, the Russian Imperial Court is a viper’s den of intrigue and ambition. Only a woman possessed of boundless courage and cunning can prove herself worthy to sit on the throne of Peter the Great.

My Review: The Tsarina’s Daughter is the sequel to Tsarina. The novel shifts its focus from Catherine and tells the story of her daughter, Elizabeth. Princess Elizabeth has always wanted to become Queen of France. When Louis XV rejects her because of her mother’s low birth, Princess Elizabeth struggles to forge her own destiny. As she watches the reigns of five rulers, Princess Elizabeth never dared to dream that she would find herself on the Russian throne. Even though Princess Elizabeth did not achieve her childhood dream of becoming Queen Consort to Louis XV of France, she eventually snatched a more glittering prize by becoming Empress Regnant of Russia.

I found Elizabeth to be a more likable and sympathetic character than her mother, Catherine I. Elizabeth loves her family and is very loyal to them. She also loves and cares for Russia and its people. While she does want the throne of Russia, she does not want to lead a coup and oust her family members. She is reluctant to take the throne for herself. She only wants to live a peaceful life and desires to become queen by designation. It is not until her life's in danger that she has to make the decision to usurp the throne or not. Therefore, Elizabeth is an admirable character. While I did not agree with some of her choices, I understood her actions. She was very brave, resourceful, and strong because she overcame many challenges.

Overall, this novel is about survival, choices, and love. I found that this novel was better written than Tsarina. The characters were also more developed than Tsarina. I understood all of the characters' motivations, and they seemed very realistic. I found it interesting that while Louis XV rejected her as his wife, he still supported and helped her to the Russian throne. The setting was very lavish because it highlighted the glitz and glamor of the Russian Imperial Court. Its opulent first pages managed to captivate me from the beginning and enthralled me until I read the last page. There was enough drama, betrayal, passion, and danger that managed to keep me glued to the page. However, there were some scenes I felt were drawn out and other scenes I thought were repetitive. Still, this was a vast improvement of Tsarina, and I enjoyed reading about Empress Elizabeth’s early years! While the novel is long, I do wish that it showed Elizabeth’s reign as empress! The Tsarina’s Daughter is a delightful treat for those that love reading about the royals! I recommend this for fans of Queen of Someday, Empress of the Night, and Imperial Highness! 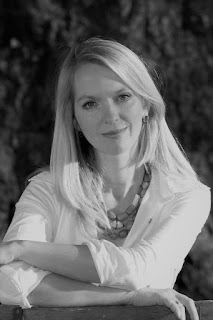 ELLEN ALPSTEN was born and raised in the Kenyan highlands. Upon graduating from L'Institut d'Etudes Politiques de Paris, she worked as a news anchor for Bloomberg TV London. Whilst working gruesome night shifts on breakfast TV, she started to write in earnest, every day, after work and a nap. Today, Ellen works as an author and as a journalist for international publications such as Vogue, Standpoint and CN Traveller. She lives in London with her husband, three sons and a moody fox red Labrador. She is the author of Tsarina. Visit her website.