A Most Clever Girl: A Novel of an America Spy by Stephanie Marie Thornton: A Book Review 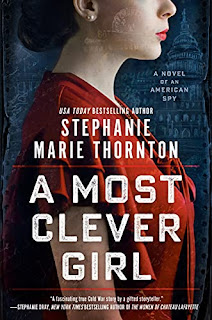 A Most Clever Girl: A Novel of an American Spy
Author: Stephanie Marie Thornton
Genre: Historical Fiction
Publisher: Berkley
Release Date: 2021
Pages: 414
Source: Netgalley/Publisher in exchange for an honest review.
Synopsis: A thrilling novel of love, loyalty, and espionage, based on the incredible true story of Elizabeth Bentley, a Cold War double agent spying for the Russians and the United States, from USA Today bestselling author Stephanie Marie Thornton.

1963: Reeling from the death of her mother and President Kennedy’s assassination, Catherine Gray shows up on Elizabeth Bentley’s doorstep demanding answers to the shocking mystery she just uncovered about her family. What she doesn’t expect is for Bentley to ensnare her in her own story of becoming a controversial World War II spy and Cold War informer…

Recruited by the American Communist Party to spy on fascists at the outbreak of World War II, a young Bentley—code name Clever Girl—finds she has an unexpected gift for espionage. But after falling desperately in love with her handler, Elizabeth makes another surprise discovery when she learns he is actually a Russian spy. Together, they will build the largest Soviet spy network in America and Elizabeth will become its uncrowned Red Spy Queen. However, once the war ends and the U.S. and U.S.S.R. become embroiled in the Cold War, it is Elizabeth who will dangerously clash with the NKVD, the brutal Soviet espionage agency.

As Catherine listens to Elizabeth's harrowing tale, she discovers that the women's lives are linked in shocking ways. Faced with the idea that her entire existence is based on a lie, Catherine realizes that only Elizabeth Bentley can tell her what the truth really is.

My Review: Elizabeth Bentley was a double agent for both the Russians and the United States. Elizabeth Bentley is most famous for accusing over eighty Americans for being Communist spies. These accusations have made historians wonder if they were truthfully baseless defamations. In this biographical novel, Elizabeth recounts her life to a woman who has been affected by her accusations. Is Elizabeth really telling the truth?

I usually like all of Stephanie Thornton’s novels, but I was not impressed with A Most Clever Girl. This is because Elizabeth Bentley was not a likable character. The author attempts to make her sympathetic by having her narrate her own story. Even on a personal level, I could not relate to her. Elizabeth did many terrible things, and even though she is trying to justify herself, there is no justification. Elizabeth really seems to be on no one’s side except herself and what benefits her. Thus, I found her selfish and ruthless. I could not trust her. I did not empathize with Elizabeth, nor was I convinced when the author tried to make her redeemable. I had no emotions towards her at all.

Overall, this novel is about lies, secrets, and redemption. The only character I found relatable was Cat. The rest of the characters were bland. The novel is very well-written and meticulously researched. The author did a fabulous job in showing the tensions of the Cold War between Russia and the United States. Because this is a spy novel, there were some exciting moments. The romance itself was a bit bland and could have been unnecessary. Thus, this novel is perfect for fans of spy novels. I recommend A Most Clever Girl to fans of The Invisible Woman, The Lunar Housewife, and Our Woman in Moscow. However, for fans of Stephanie Thornton this was not her best work. I advise you to skip it and read her other works because you are not missing out on much here.