The Forgotten Kingdom (The Lost Queen #2) by Signe Pike: A Book Review 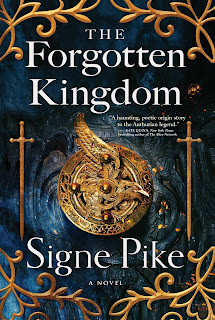 Synopsis: From the author of The Lost Queen, a new novel in which a forgotten queen of 6th-century Scotland claims her throne as war looms and her family is scattered to the winds.

AD 573. Imprisoned in her chamber, Languoreth awaits news in torment. Her husband and son have ridden off to war against her brother, Lailoken. She doesn’t yet know that her young daughter, Angharad, who was training with Lailoken to become a Wisdom Keeper, has been lost in the chaos. As one of the bloodiest battles of early medieval Scottish history abandons its survivors to the wilds of Scotland, Lailoken and his men must flee to exile in the mountains of the Lowlands, while nine-year-old Angharad must summon all Lailoken has taught her to follow her own destiny through the mysterious, mystical land of the Picts.

In the aftermath of the battle, old political alliances unravel, opening the way for the ambitious adherents of the new religion: Christianity. Lailoken is half-mad with battle sickness, and Languoreth must hide her allegiance to the Old Way to survive her marriage to the next Christian king of Strathclyde. Worst yet, the new King of the Angles is bent on expanding his kingdom at any cost. Now the exiled Lailoken, with the help of a young warrior named Artur, may be the only man who can bring the warring groups together to defeat the encroaching Angles. But to do so, he must claim the role that will forever transform him. He must become the man known to history as “Myrddin.”

My Review: The Forgotten Kingdom is the sequel to The Lost Queen. Languoreth is a prisoner in her own council as she awaits the news of her husband who is fighting against her brother and first love. Eventually, her husband returns and becomes king. As queen, can Languoreth find a way to bring peace between the Old Religion and the New? As Languoreth learns the ropes of queenship, she discovers that there is a personal cost.

Languoreth is the sole narrator in The Lost Queen. However, her story is barely focused upon because the story also focuses on her brother, Lailoken and her daughter, Angharad. She sits on the sidelines throughout the novel, which I was a little disappointed in. Still, this novel shows Languoreth as a grieving mother who yearns for her lost children. There are also some glimpses of her striving to be a good queen and leader. Still, I wish that there was more to Languoreth’s journey than what was offered in this novel. I loved Angharad’s story as she grows from a child to a confident priestess. She is the true hero of this story. I found Lailoken’s story to be my least favorite and unnecessary. You could skip his chapters and not miss out on anything in the story.

Overall, this novel is about war, religion, and choices. The characters seemed to be very complex. The setting seemed very realistic and made medieval Scotland come to life. The Forgotten Kingdom was beautifully written and made me feel like I was walking alongside the characters. I also thought the ending seemed rushed. Still, I can’t wait to read the final book in the trilogy. I want to see what the next book has in store for these characters! I recommend this novel for fans of Queen of Oak, The Mists of Avalon, and The Raven Queen!

This is the official book trailer for The Forgotten Kingdom: