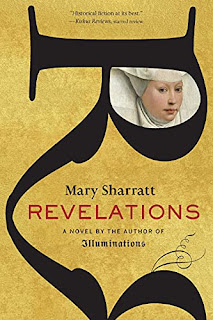 Bishop’s Lynn, England, 1413. At the age of forty, Margery Kempe has nearly died giving birth to her fourteenth child. Fearing that another pregnancy might kill her, she makes a vow of celibacy, but she can’t trust her husband to keep his end of the bargain. Desperate for counsel, she visits the famous anchoress Dame Julian of Norwich.

Pouring out her heart, Margery confesses that she has been haunted by visceral religious visions. Julian then offers up a confession of her own: she has written a secret, radical book about her own visions, Revelations of Divine Love. Nearing the end of her life and fearing Church authorities, Julian entrusts her precious book to Margery, who sets off the adventure of a lifetime to secretly spread Julian's words.

Mary Sharratt vividly brings the medieval past to life as Margery blazes her trail across Europe and the Near East, finding her unique spiritual path and vocation. It's not in a cloistered cell like Julian, but in the full bustle of worldly existence with all its wonders and perils.

My Review: Margery Kempe has been known in history to have written the first autobiography in English. She was a mystic who described her visions in her work. In Revelations, Margery is the wife of a brewer. She bore her husband fourteen children. After the birth of her fourteenth child, she makes a vow of celibacy. She makes plans for a departure on a pilgrimage to Jerusalem. Before she embarks, she meets the anchoress Julian of Norwich. The two strike up a spiritual friendship, and she tells Julian of Norwich her mystic visions. Julian of Norwich asks Margery to make her book, Revelations of Divine Love, spread throughout the world.

Margery is a very remarkable and admirable protagonist. She feels worthless and trapped in a marriage in which she constantly has to bear children. She feels that her husband does not respect her, and that he merely regards her as chattel. Her only comfort through her long and broken marriage is God and her mystical visions. One day, she makes the courageous choice to leave her husband. She strikes up a friendship with Julian of Norwich, who does not condemn her but sees her as a sister in Christ. I really love Margery’s and Julian’s relationship. Julian of Norwich’s non-judgmental attitude had a profound and lasting effect on her. She inspires to be like Julian of Norwich, which was to love Christ and have faith in him. When people condemn Margery for leaving her husband and children to follow Christ, Margery keeps her head high. Throughout the novel, she is constantly tested on her faith. In the end, her faith in God helps her through her most difficult moments. Thus, Margery is very admirable because she grows stronger in her faith.

Overall, this book is about freedom, faith, and friendship. I found many of the characters to be very complex. Revelations was a very mesmerizing novel. I read it in one sitting. Mrs. Sharratt made the medieval world come alive. The author also did an excellent job in portraying how women were regarded in the Middle Ages. The novel was also very fast-paced, for it depicted Margery’s pilgrimages and her infamous heresy trial. Revelations is a very compelling and thought-provoking novel that focuses on mysticism and spirituality in an intolerant society. I recommend this novel for fans of Hild, Julian’s Cell, and The Greenest Branch!