Queen of Stone (The Celtic Rebels #2) by Melanie Karsak: A Book Review 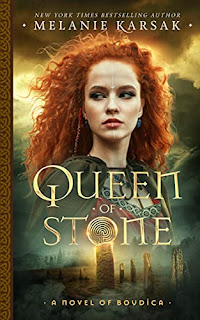 Queen of Stone: A Novel of Boudica (The Celtic Rebels #2)
Author: Melanie Karsak
Genre: Historical Fiction, Fantasy
Publisher: Clockpunk Press
Release Date: June 2, 2021
Pages: 778
Source: This book was given to me by the author in exchange for an honest review.

Synopsis: Fated to lead a rebellion against Rome. Destined to become a legend.

With the arrival of the Romans, Boudica’s world is in upheaval. She and Prasutagus must decide where they stand. Will they fight the invaders alongside Caratacus or bargain with the Romans to secure the future of the Iceni? Every choice seems like a bad one. But more than anything, Boudica wants to keep her people and her family safe. Whispers from the greenwood—the groves, the rivers, and the stones—warn of unseen dangers. Can Boudica protect all she loves without bowing to the eagle?

Continue the epic tale of the famous warrior queen in Queen of Stone: A Novel of Boudica, book 2 in the Celtic Rebels series by New York Times bestseller Melanie Karsak.

My Review: Boudica is Queen of the Greater Iceni. She had not yet settled into her new home when the Romans landed on their shores. Boudica is in a dilemma. She either has to fight or make peace with the Romans. Boudica decides that it is best for her kingdom if she becomes a client queen under Rome. However, she wonders if she has made the right decision. Boudica wonders if there is a personal cost by being an ally with Rome. Yet, she foresees that one day she may take up arms against Rome herself.

Boudica has matured greatly since Queen of the Oak. Now that she is a queen, Boudica must contemplate what is best for her people. Boudica takes her queenship very seriously. She is not afraid to submit to Rome if it is in her people’s welfare. She wants to strengthen her kingdom and live in peace. With the Romans seeking to destroy the Druid religion, Boudica wonders if she did the right thing. Thus, we can see that Boudica is a reluctant heroine because she is still hesitant to take up arms against the Romans. Thus, Boudica has grown from a rebellious and wild princess from the first novel to a meticulous, level-headed, and responsible queen in the second novel.

Overall, this novel has political intrigue sprinkled with plenty of magic, action, and romance. All the characters are complex and very realistic. I also thought the author did a superb job in weaving Boudica’s story with the known facts of the Roman invasion of Britain in 43 C.E. While the second novel is slower paced than the first novel, I thought it laid excellent groundwork for what is to come in the next installments. It has been a pleasure walking alongside Boudica and seeing her conflict about fighting the invaders. Because of this book, Boudica seems more real to me rather than simply a name in a history textbook! I can’t wait to read the third book! I recommend Queen of Stone for fans of Daughters of Fire, The Eagle and The Raven, and Dreaming the Eagle! Mrs. Karsak proves that her The Celtic Rebels series must not be missed!