The Turncoat's Widow: A Revolutionary War Mystery by Mallt Becker: A Book Review 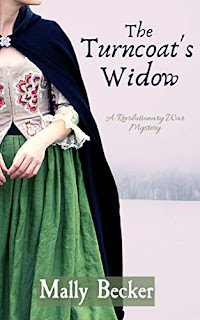 Synopsis: Recently widowed, Rebecca Parcell is too busy struggling to maintain her farm in Morristown to give a fig who wins the War for Independence. But rumors are spreading in the winter of 1780 that she’s a Loyalist sympathizer who betrayed her husband to the British—quite a tidy way to end her disastrous marriage, the village gossips whisper.

Everyone knows that her husband was a Patriot, a hero who died aboard a British prison ship moored in New York Harbor. But “everyone” is wrong. Parcell was a British spy, and General Washington—who spent that winter in Morristown—can prove it. He swears he’ll safeguard Becca’s farm if she unravels her husband’s secrets. With a mob ready to exile her or worse, it’s an offer she can’t refuse.

Escaped British prisoner of war Daniel Alloway was the last person to see Becca’s husband alive, and Washington throws this unlikely couple together on an espionage mission to British-occupied New York City. Moving from glittering balls to an underworld of brothels and prisons, Becca and Daniel uncover a plot that threatens the new country’s future. But will they move quickly enough to warn General Washington? And can Becca, who’s lost almost everyone she loves, fight her growing attraction to Daniel, a man who always moves on?

My Review: The Turncoat’s Widow begins with the execution of Phillip Parcell, a British spy who has been caught selling British secrets to the Americans. Before his execution, he left a list of names of other British spies in his wife Becca's possession. He hopes that Becca will find the list and give it to the Americans. While Becca is looking for the list, she is given a task by George Washington and becomes a spy for the American cause. She is aided by Daniel Alloway, a British prisoner. Becca and Daniel set out on a dangerous mission to track down the British spies.

Becca is a compelling character. She is often judged by the locals because it is assumed that she has betrayed the British. Therefore, she is an outcast by society. The only person who believes in her is George Washington, and she is employed to be a spy for the American cause. Over time, Becca becomes a patriot. She is a strong woman and is very smart. I liked her romance with Daniel. Both of them have sad pasts. They were able to connect with each other very deeply and have the same cause. Therefore, they truly belonged with each other.

Overall, this novel is about choices, patriotism, and war. I liked how the novel showed how many people in colonies did not support the American cause. Many of them still wanted to be British. Therefore, it was interesting to see how unpopular and unlikely the American cause was. The many characters in this novel were very realistic. The mystery itself was fun to unravel because there were a lot of twists and turns! The Turncoat’s Widow is meticulously researched and made the Revolutionary era come alive. The only thing I did not like about this was the beginning was very slow, but picked up in the middle. Still, there is enough action, suspense, and romance that will keep you turning pages! I am excited to read the sequel! I recommend The Turncoat’s Widow for fans of City of Liars and Thieves, Cry of the Innocent, and This Day is Ours!