A Peculiar Combination (An Electra McDonnell Mystery #1) by Ashley Weaver: A Book Review 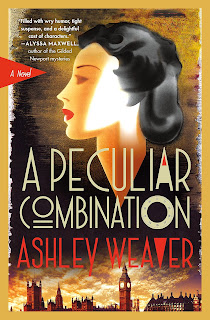 Electra McDonnell and her family earn their living outside the law. Breaking into the homes of the rich and picking the locks on their safes may not be condoned by British law enforcement, but with World War II in full swing, Uncle Mick’s locksmith business just can’t pay the bills anymore.

So when Uncle Mick receives a tip about a safe full of jewels in an empty house, he and Ellie can’t resist. All is going as planned—until the pair is caught red-handed. But instead of arresting them, government official Major Ramsey has an offer: either Ellie agrees to help him break into a safe and retrieve blueprints crucial to the British war effort, or he turns her over to the police.

Ellie doesn’t care for the major’s imperious manner, but she has no choice. However, when they break into the house, they find the safe open and empty, and a German spy dead on the floor. Soon, Ellie and Major Ramsey are forced to put aside their differences to unmask the double agent, and stop Allied plans from falling into enemy hands.

My Review: Ellie McDonnell and her uncle Mick are thieves. One night, they break into a house to crack a safe. However, it turns out to be a set-up, and they are caught red-handed. In order to get out of prison, Ellie makes a deal with a government official, Major Ramsey, to break a safe filled with German secrets. Once she arrives at the safe, she finds nothing but a dead German spy. Ellie goes on an investigation to find out who killed the German spy and uncover what secrets the Germans hold.

I found Ellie to be a very annoying character. When nothing goes her way, she would complain. Even though she was an adult, she acted like a spoiled teenager. Therefore, while she was a genius at code-breaking, independent, and tough, I could not like her character. I did not find her charming. Her sassy remarks came off as whiny. Therefore, she was not an appealing character.

Overall, this novel is about loyalties, secrets, and spies. A Peculiar Combination is more of a spy thriller than a cozy historical mystery. Even though I disliked Ellie, I still found a few decent characters that I liked. I thought Ellie’s uncle was the most interesting character in this series. The love triangle was unnecessary and distracting. Still, this was a very fast-paced novel that is filled with political intrigue, action, danger, and humor! A Peculiar Combination is very well-written and is full of vivid details about World War II! Thus, this novel did pique my interest in reading the sequel. I hope that Ellie becomes more mature and likable in the next novel. I recommend this to those interested in World War II spy novels. A Peculiar Combination is perfect for fans of The Rose Code, In Farleigh Field, and Louise’s Chance!