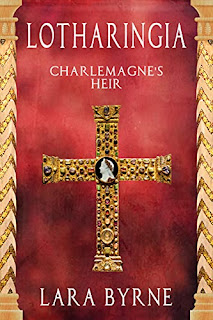 A.D. 1062. The Holy Roman Emperor is dead, and his underage son, snatched from his mother, is a puppet in the hands of regents. The fate of the empire lies in the hands of three women. Surprisingly, the Church takes their side, but Rome’s support has a price. Matilde refuses to be a pawn in the marriage game. Is she the child of Charlemagne’s prophecy?

Countess Matilde prepares to succeed her late father as margrave of Tuscany. A descendant of Charlemagne, heiress to the most prestigious relics in Christendom, and a trained warrior, she could comfortably rule on her own. To her dismay, the Church will support her extraordinary claim to power only if she accepts a traditional role and marries the Duke of Lotharingia - a man who fills her with dread.

Despite her formidable mother's diplomatic nous and mysterious relics of the Holy Blood, Matilde's efforts to extricate herself from her betrothal are crushed by the intrigues of the all-seeing papal archdeacon Ildebrando.

Across the Alps, the late emperor's son, King Heinrich, has come of age, in a court rife with passions and treasonous ambitions. Resenting the bride chosen for him, he stuns his subjects and Rome with a defiant request to divorce. Ildebrando shatters his hopes. When, after a chance meeting, Heinrich rescues Matilde from her abusive husband, friendship blossoms into forbidden love. If their sin is discovered, the Church may strike them down with excommunication - political and personal ruin. And unbeknown to Matilde and Heinrich, the stakes are even higher: Charlemagne's prophecy may be about to come true.

In the 11th century, Countess Matilde of Tuscany was the most famous woman in Christendom, a trailblazer who defied the gender expectations of her age to become the most powerful prince of the Holy Roman Empire for two generations. Exploiting the gaps and contradictions in medieval chronicles, Lotharingia weaves history and fiction into an alternative account of the world and challenges that shaped her youth, as she grappled with the constraints of femininity in her quest for self-definition, power, and love.

My Review: Matilda of Tuscany was one of the most powerful women in Italy during the eleventh century. She was a warrior of the pope who fought against Henry IV, the Holy Roman emperor. She was one of the three women to be buried in St. Peter’s Basilica. This novel tells of the forbidden love story between Matilda of Tuscany and Henry IV. Matilde is a descendant of Charlemagne and a warrior. However, her husband Godefrey abuses her and she runs away from her husband. She meets King Heinrich (Henry IV) of Germany and stays in his court. King Heinrich is also unhappy with his arranged marriage. Together the two fall in love, but destiny may force them to become enemies.

Matilde of Tuscany is a strong woman. She is a tomboy and loves sword fighting. She is a devout Catholic and is faithful to the pope. She also harbors a secret ambition to emulate her ancestor, Charlemagne. I liked that she was not afraid to ask for an annulment from the Catholic Church. This shows that she wielded immense authority in Rome. She falls immediately head-over-heels in love with King Heinrich because he took her in. She is also attracted to his looks and charming words. At first, she wielded extraordinary influence over him. However, Heinrich does not want to be anyone's pawn. He wants the state to interfere with religious matters. He wants full control. Because of his desire to control the church, Matilde wonders if she should stay or leave him. Thus, Matilde is an interesting conflicted character, and I found her relationship with Heinrich to be very interesting.

Overall, this novel focuses on church versus state, power, and forbidden love. I found the large cast of characters to be well-written. My only complaint in the novel is that sometimes it could be repetitive. Lotharingia tells the tale of two lovers who become enemies due to different beliefs. The novel is very well-written and shows the political and church politics of the Middle Ages. I can’t wait to read the sequel, and I wish it was already out! I did not want this novel to end! Lotharingia is a feast for historical fiction lovers that will leave readers craving for more! I recommend this to fans of Lady of the English, Queen of the Darkest Hour, and Four Sisters, All Queens!