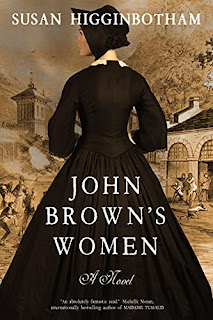 Wealthy Brown, married to John Brown's oldest son, eagerly falls in with her husband's plan to settle in Kansas. Amid clashes between pro-slavery and anti-slavery settlers, Wealthy's adventure turns into madness, mayhem, and murder.

Fifteen-year-old Annie Brown is thrilled when her father summons her to the farm he has rented in preparation for his raid. There, she guards her father's secrets while risking her heart.

Mary Brown never expected to be the wife of John Brown, much less the wife of a martyr. When her husband's daring plan fails, Mary must travel into hostile territory, where she finds the eyes of the nation riveted upon John—and upon her.

Spanning three decades, John Brown's Women is a tale of love and sacrifice, and of the ongoing struggle for America to achieve its promise of liberty and justice for all.

My Review: John Brown was an abolitionist who was famous for fighting in the events of Bleeding Kansas and for leading a failed slave revolt at Harper’s Ferry. This novel tells the story of three women who were related to John Brown. The first is his second wife, Mary Brown. The second is his daughter-in-law, Wealthy Brown, and the third is his daughter, Annie Brown. John Brown’s Women shows the hardships and struggles these women face as John Brown pursued his mission to abolish slavery.

John Brown’s Women feels like a collection of short stories surrounding the women in John Brown’s family. The first part is Mary’s story. The second part shifts its focus to Wealthy. The third part then tells Annie’s story. The novel then concludes with Mary Brown. Throughout, I could not connect to any of these women, which is sad because Mary and Wealthy go through many hardships. This is because the novel was told in a passive voice. Therefore, I was emotionally detached from all the characters.

Mary Brown was a young girl who was a housekeeper for John Brown and his family. Mary’s sister was supposed to marry John Brown, but John chose Mary instead. While Mary does not have much of an education and lacks in female penmanship, she does have a sound mind. There were a few actions I did not agree with, but for the most part she was very reasonable. Mary loses many children. Because the novel tells and not shows, I didn’t feel anything about the pain she was going through. Those scenes were written like a dry textbook so I had no reaction to the story. There are very few scenes between John and Mary because John spends most of his time away. Mary takes care of the farm. This novel shows that Mary is the matriarch and kept the family together.

Wealthy Brown’s story is the most interesting, but is written the same way as Mary. She is married to John Brown Jr. She gives up the life she has known to follow her husband into the wilderness. She faces many hardships. When John Jr. is arrested for being part of the events of Bloody Kansas, she remains with him. She offers him comfort and guidance. Therefore, Wealthy is shown as a devoted and faithful wife.

Annie’s story seemed like it would be an interesting tale. I thought it would show the strong bond between her and her father. I did not get that. Instead, Annie’s story focused on a cheesy teen love triangle. The writing in Annie’s storyline was very juvenile and consisted of instant love. Therefore, out of the three women’s tales, this was the least interesting.

Overall, this novel is about injustices, freedom, and family. All the characters, especially John Brown, were flat and undeveloped. This novel suffers from being told and not shown. The author did an excellent job in portraying the issues of the pre-Civil War era. The novel is meticulously researched. John Brown’s Women had the potential to be a very moving and heart-wrenching story yet it was written like a textbook. I honestly think John Brown’s Women should have been written as a nonfiction work instead of historical fiction. It would have been more enjoyable. Instead, this novel was very slow and tedious with flat characters. Still, this novel does shine a light on the women behind a famous man. I recommend this for fans of This Side of the River, The Tubman Command, and The Spymistress!