The People's Princess by Flora Harding: A Book Review 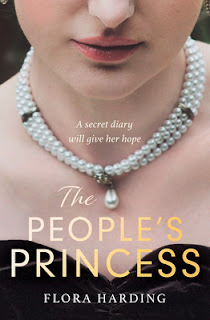 The People’s Princess
Author: Flora Harding
Genre: Historical Fiction
Publisher: One More Chapter
Release Date: March 31, 2022
Pages: 322
Source: Netgalley/Publisher in exchange for an honest review.
Synopsis: Step behind the palace doors in this gripping historical novel that is a must read for fans of The Crown and Princess Diana!

Her engagement to Prince Charles is a dream come true for Lady Diana Spencer but marrying the heir to the throne is not all that it seems. Alone and bored in the palace, she resents the stuffy courtiers who are intent on instructing her about her new role as Princess of Wales…

But when she discovers a diary written in the 1800s by Princess Charlotte of Wales, a young woman born into a gilded cage so like herself, Diana is drawn into the story of Charlotte’s reckless love affairs and fraught relationship with her father, the Prince Regent.

As she reads the diary, Diana can see many parallels with her own life and future as Princess of Wales.

The story allows a behind-the-scenes glimpse of life in the palace, the tensions in Diana’s relationship with the royal family during the engagement and the wedding itself.

My Review: Diana Spencer has recently become engaged to Charles, the Prince of Wales. She dreams that her happily ever after is about to begin. However, her days as Charles’s future wife is not like she imagined it would be. Diana finds herself lonely and rarely spends time with Charles. One day, she sees a portrait of Charlotte, the Princess of Wales. She becomes curious about this princess and discovers her diary. This story tells the tale of both princesses who were trying to find their own happiness.

Charlotte was the daughter of George IV and Caroline of Brunswick. She was the Princess of Wales and in line to inherit the crown of England. Sadly, she died in childbirth before she could become queen. In this historical novel, Charlotte is a very fascinating woman. Her parents are trapped in a loveless marriage and often neglect her. Charlotte is a passionate woman and yearns to find love. She is also rebellious at times to pursue her own happiness. When she enters into a loveless betrothal, she fights against her father to break it. Charlotte also has to deal with the pressure. Charlotte is also in love with a man that does not return her affections. She gives him up and marries another. While she does not love her husband initially, she grows to love him. Charlotte is a tragic figure, and I could not help but wonder what England might have been like had Charlotte survived childbirth and became the Queen of England.

Everyone knows the story of Diana, whose life was a fairytale that had gone wrong. While her story is not surprising and not as fascinating as Charlotte, Diana’s storyline is still very compelling. Diana is portrayed as a sympathetic character. She thought she would have a fairytale romance and live happily. However, she often finds herself alone while Charles is often in the company of Camilla. She often wonders if Charles is truly in love with her. Diana also struggles with the press and bulimia. She wonders if she can be the princess that Charles is proud of. She is intrigued by Charlotte because she finds many parallels with her life. Even though she doesn’t believe Charles loves her, she is willing to marry because Charlotte didn’t love her husband initially, but their affection for each other grew after marriage. Diana believes that while she and Charles are not passionately in love then they can grow to love each other in time. With this reason, Diana is hopeful that her marriage can bring her happiness. Because readers know how her marriage ultimately failed, we sympathize with her and know she is making the biggest mistake of her life. Therefore, Diana is just as tragic as Charlotte.

Overall, this novel is about happiness, decisions, and duty. The novel tells about two tragic princesses who were beloved by the public. All of the characters were very complex. There were some parts of the novel, especially Diana’s story that were repetitive. Nevertheless, the novel is very well-written and meticulously researched. The People’s Princess is a very tragic, heartbreaking, and moving novel. This novel will linger with the reader long after they have read the last page. The reader cannot help but wonder what would have happened to Charlotte and Diana had certain events and decisions happened differently. The People’s Princess is definitely a must read for fans of the British royals! I recommend this for fans of The Other Windsor Girl, The Duchess, and The Queen’s Secret!