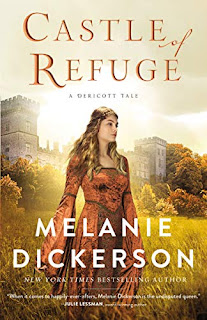 Ever since she was a child, Audrey wanted her life to be extraordinary. But as the daughter of a viscount born in late fourteenth-century England, the only thing expected of her was to marry—until an act of malice by her sister, Maris, four years ago damaged her face and her prospects. Though Maris was sent away, twenty-year-old Audrey is still suffering the scars of her sister’s cruelty. When her father announces his plans to marry off his damaged daughter and bring Maris home, Audrey decides to flee in search of her true destiny.

Life outside her home is dangerous, and Audrey soon finds herself attacked, sick, and in desperate need of help. She is taken in at Dericott Castle to be nursed back to health. While there, she decides to keep her identity a secret and work as a servant in the castle. But she doesn’t count on falling in love with the young and handsome Lord Dericott, who lost his arm several months earlier and bears scars of his own.

Meanwhile, Edwin—Lord Dericott—is curious about the new, well-educated servant’s identity. All he knows is that he’s quickly becoming smitten with her. When the man Audrey’s father wanted her to marry comes looking for her, she and Edwin must make life-changing decisions about what to believe and whether or not love is truly worth trusting.

My Review: Castle of Refuge is the second novel in the Dericott Tale series. Castle of Refuge is also a fairytale retelling of “The Ugly Duckling”. Because Audrey is the daughter of a viscount, she has always planned to marry a nobleman, until one day her sister scars her face. Due to her damaged face, Audrey doesn’t think that anyone would want to marry her. When her father plans to marry her off, she runs away to Dericott Castle and falls in love with Sir Edwin. Through a series of events, Audrey and Edwin must overcome difficulties to find their happily ever after.

I was hesitant to read this book because I was disappointed with Court of Swans. Because this was a retelling of “The Ugly Duckling”, which is a tale very seldom retold and Melanie Dickerson is still my favorite author, I was still interested in this novel. I have to say that Castle of Refuge is a vast improvement on the Court of Swans. Audrey is a likable character. She has a mean sister that has damaged part of her face. Because of her scars, she is insecure about her looks. Throughout the novel, Audrey struggles to gain the confidence that she once had. Therefore, I thought Audrey grew throughout the book. Audrey’s love interest is Sir Edwin, Delia’s brother from the Court of Swans. He too is a damaged character due to his lost arm. I thought that Audrey and Edwin’s romance was very compelling. Both of them are  struggling to gain confidence and recover from what they lost. Together, they heal from their tragic past. Therefore, the love story was very beautiful.

Overall, this novel is about healing, love, and forgiveness. The message of the book is that God can heal all mental wounds. I thought all the characters, including the villain, were very compelling. The story moves at a steady pace though there were a few rushed parts. Thus, Castle of Refuge is a unique and refreshing fairytale! Mrs. Dickerson has outdone herself in this novel! I can’t wait to read the next installments in the Dericott Tale series! I recommend Castle of Refuge for fans of Jody Hedlund, Jan Davis Warren, and Tamara Leigh!