The Last Grand Duchess by Bryn Turnbull: A Book Review 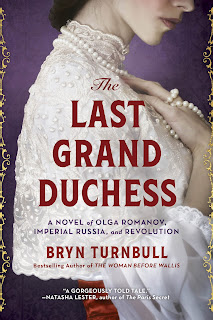 Grand Duchess Olga Romanov comes of age amid a shifting tide for the great dynasties of Europe. But even as unrest simmers in the capital, Olga is content to live within the confines of the sheltered life her parents have built for her and her three sisters: hiding from the world on account of their mother’s ill health, their brother Alexei’s secret affliction, and rising controversy over Father Grigori Rasputin, the priest on whom the tsarina has come to rely. Olga’s only escape from the seclusion of Alexander Palace comes from the grand tea parties her aunt hosts amid the shadow court of Saint Petersburg — a world of opulent ballrooms, scandalous flirtation, and whispered conversation.

But as war approaches, the palaces of Russia are transformed. Olga and her sisters trade their gowns for nursing habits, assisting in surgeries and tending to the wounded bodies and minds of Russia’s military officers. As troubling rumours about her parents trickle in from the front, Olga dares to hope that a budding romance might survive whatever the future may hold. But when tensions run high and supplies run low, the controversy over Rasputin grows into fiery protest, and calls for revolution threaten to end three hundred years of Romanov rule.

At turns glittering and harrowing, The Last Grand Duchess is a story about dynasty, duty, and love, but above all, it’s the story of a family who would choose devotion to each other over everything — including their lives.

My Review: The Last Grand Duchess tells the downfall of the imperial Romanov dynasty from the perspective of Olga, the daughter of Tsar Nicolas II and Tsarina Alexandra. Olga Romanov enjoys the parties and ballroom dances of imperial Russia. However, with the start of World War I, there is growing discontent in the country. There is talk of a Russian Revolution. Olga goes from being a sheltered princess to a woman who does everything to protect her family even if it costs her life.

The Last Grand Duchess portrays Olga as a young, naive sheltered princess as she grows into a smart, intelligent young woman who risks her life to protect her family. I thought Mrs. Turnbull did an excellent job in depicting Olga’s character. At first, Olga loves parties and even has an innocent crush on one of the soldiers. As she grows older, Olga is aware of the people's hatred of the imperial family and is constantly uneasy about the political unrest. I admired how Olga sacrificed love in order to protect her family. Her family is everything to her. She would rather die with her family than live and be without them. Therefore, I found Olga to be a very courageous woman who had the tenacity to stand up to peril.

Overall, this novel is about family, sacrifice, and courage. While I thought the imperial family was well-written, I thought other major characters in this novel needed more development. There are also two alternating timelines. The first timeline is before the Russian Revolution, and the second one is during the Russian Revolution. I preferred it was told in a more linear format rather than going back and forth between two timelines. This would have avoided some confusion. Several times I had to go back and reread the last few pages of the previous timeline to help me remember where it left off. Still, I thought Mrs. Turnbull did an excellent job in portraying the civil unrest of the Russian Revolution. Mrs. Turnbull did not hesitate to show Tsar Nicolas II’s mistakes as a ruler. He kept making one blunder after another and did not listen to criticism by those who cared about him. The only voice he listened to was his wife who also made mistakes and ignored criticism. Therefore, Mrs. Turnbull showed that Nicolas and Alexandra were out of touch with the realities of the country and their downfall was inevitable. The book is a very well-researched novel that vividly describes the downfall of the imperial family. The Last Grand Duchess is a story full of tragedy, drama, and romance that shows the decay of the glittering facade of an imperial court. This is a must read for fans of the Romanovs. I also recommend this novel for fans of The Romanov Empress, The Funeral Bride, and The Romanov Bride!