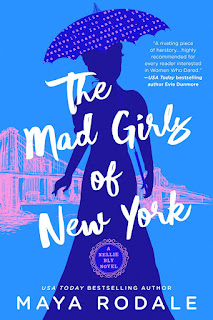 The Mad Girls of New York (Nellie Bly #1)
Author: Maya Rodale
Genre: Historical Fiction
Publisher: Berkley
Release Date: April 26, 2022
Pages: 336
Source: Netgalley/ Publisher in exchange for an honest review.
Synopsis: An exciting novel based on the fearless reporter Nellie Bly, who would stop at nothing to expose injustices against women in 19th century New York, even at the risk of her own life and freedom.

In 1887 New York City, Nellie Bly has ambitions beyond writing for the ladies pages, but all the editors on Newspaper Row think women are too emotional, respectable and delicate to do the job. But then the New York World challenges her to an assignment she'd be mad to accept and mad to refuse: go undercover as a patient at Blackwell's Island Insane Asylum for Women.

For months, rumors have been swirling about deplorable conditions at Blackwell’s, but no reporter can get in—that is, until Nellie feigns insanity, gets committed and attempts to survive ten days in the madhouse. Inside, she discovers horrors beyond comprehension. It's an investigation that could make her career—if she can get out to tell it before two rival reporters scoop her story.

My Review: Nellie Bly is one of America's most recognizable female journalists. In this novel, Nellie Blu is an aspiring journalist who has recently moved to New York. Because she wants to work for the regular papers and not for pages solely for the ladies, she is constantly rejected. However, she impresses an editor when she claims she could get the juicy story of the horrible conditions of Blackwell Asylum, a place for women that allows no visitors. Nellie proposes to go undercover for a week to learn the asylum’s dark secrets. Once she arrives, she learns that the conditions of Blackwell Asylum are more horrible than one can imagine. As she is mistreated and abused every day, Nellie starts to question her sanity.

Nellie is a very admirable character. She is a very compassionate person and believes herself to be a champion for women’s rights. I found her very courageous and daring. She is also a genius because she is able to convince many people that she is mad. Nellie wants to be a journalist because she believes that journalism is a stepping stone for change in society. She believes that once certain issues are brought to light through media, then there can be small changes to society. Therefore, this novel shows Nellie as a passionate woman who wants to help the women around her. This made her a very lovable character.

Overall, this novel is about truth, justice, and change. All of the characters were very well-developed and likable. I especially enjoyed Nellie’s rival and the women in the asylum. Many of these women have very interesting stories. Mrs. Rodale portrayed these women as downtrodden and hard on their luck. I also like how the author features other successful female journalists in this novel. This made for a very compelling read! The only thing I did not like about the book was that there were times the story tended to drag. Still, The Mad Girls of New York was a very engrossing read that had a hint of romance, humor, and mystery! I can’t wait to read the sequel to read more about Nellie’s adventures! I recommend this novel for fans of What Girls are Good For, The Alchemy of Murder, and Emmy Nation: Undercover Suffragette!