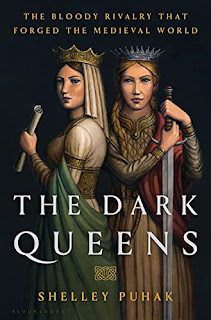 Brunhild was a foreign princess, raised to be married off for the sake of alliance-building. Her sister-in-law Fredegund started out as a lowly palace slave. And yet-in sixth-century Merovingian France, where women were excluded from noble succession and royal politics was a blood sport-these two iron-willed strategists reigned over vast realms, changing the face of Europe.

The two queens commanded armies and negotiated with kings and popes. They formed coalitions and broke them, mothered children and lost them. They fought a decades-long civil war-against each other. With ingenuity and skill, they battled to stay alive in the game of statecraft, and in the process laid the foundations of what would one day be Charlemagne's empire. Yet after the queens' deaths-one gentle, the other horrific-their stories were rewritten, their names consigned to slander and legend.

In The Dark Queens, award-winning writer Shelley Puhak sets the record straight. She resurrects two very real women in all their complexity, painting a richly detailed portrait of an unfamiliar time and striking at the roots of some of our culture's stubbornest myths about female power. The Dark Queens offers proof that the relationships between women can transform the world.

My Review: The Dark Queens is a dual biography on Merovingian queens, Brunhild and Fredegund. Brunhild was a Visigoth princess who married King Sigibert of Austrasia as part of a marriage alliance. Fredegund was a slave who was the mistress of King Sigibert’s brother, King Chilperic of Neustria. Eventually, Fredegund becomes King Chilperic’s third wife. These two queens were the most powerful women in the sixth century Merovingian Europe. However, the two queens disliked each other and waged civil war on each other. This biography tells the tale of their rivalry.

The two queens' early origins could not be more different. However, they had some similarities. Brunhild was a princess who married for a marriage alliance. Fredegund was a slave that rose to become queen. However, both of these queens are very ambitious and are repeatedly scheming for power. Both of their husbands are assassinated and the queens become regents for their sons. These two are very power-hungry. However, they were very successful rulers. Both of them were skilled diplomats, administrators, and were excellent military strategists. It is sad that these two queens could not get along. However, I could see why. Brunhild resented Fredegund because she had a hand in her sister’s and husband’s deaths. I also liked Brunhild more because Fredegund was very ruthless and did horrible things. Yet, this biography highlights Fredegund’s accomplishments.

Overall, this biography tells the rivalry between two powerful but forgotten queens. I had not heard of these queens before so I found their story fascinating. The biography’s greatest flaw is that there are not many facts known about the queens to have made a full book. Therefore, the author often goes to other topics that are irrelevant to the queens. Also, the author mostly uses conjectures on what the queens are thinking or feeling that reads like a historical fiction novel rather than nonfiction work. I think that this would have been more enjoyable if it was not a nonfiction work but a historical fiction novel. Still, this biography is very comprehensive and these queens' lives are fascinating. The Dark Queens reads like a soap opera because there is treachery, scandal, and intrigue! I recommend this for fans of Caesars' Wives, Sister Queens, and Four Queens!