The Widow Queen (The Bold #1) by Elżbieta Cherezińska: A Book Review 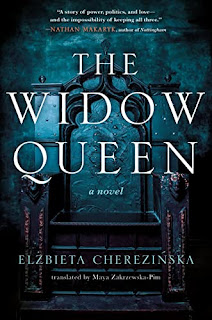 The Widow Queen (The Bold #1)
Author: Elżbieta Cherezińska
Genre: Historical Fiction
Publisher: Forge Books
Release Date: 2021
Pages: 504
Source: Netgalley/Publisher in exchange for an honest review.
Synopsis: Elzbieta Cherezinska's The Widow Queen is the epic story of a Polish queen whose life and name were all but forgotten until now.

The bold one, they call her—too bold for most.

To her father, the great duke of Poland, Swietoslawa and her two sisters represent three chances for an alliance. Three marriages on which to build his empire.

But Swietoslawa refuses to be simply a pawn in her father's schemes; she seeks a throne of her own, with no husband by her side.

The gods may grant her wish, but crowns sit heavy, and power is a sword that cuts both ways.

My Review: Swietoslawa is a member of the Piast dynasty. She dreams to be a female ruler without ruling alongside a man. However, she knows that her ambitions are futile. Her father plans an advantageous marriage for her. The winner is King Eric of Sweden. Swietoslawa sails to Sweden and becomes queen. However, she finds that there is danger that threatens her on all sides. Can Swietoslawa maneuver through the political machinations and become the strong queen that she desires to be?

While Swietoslawa is a fictional name, she is based on the Swedish queen Sigrid Storrada, who is a prominent figure in Nordic tales. In tales, Sigrid was known to be the wife of both kings Eric of Sweden and Sven of Denmark. She was also sought after by King Olav of Norway. She was most famously known for setting her suitors on fire. With the wealth of literature about Sigrid known to us, The Widow Queen would be a juicy read. I have to say that The Widow Queen was everything I had wanted it to be.

Swietoslawa is a very powerful and feisty woman. She can hold her own in a male dominated world. She makes very witty remarks that puts her male opponents in their place. She is also not afraid to be ruthless to protect those she loves. She knows her duties as queen and can sacrifice her personal happiness for her country. Swietoslawa is also a Christian woman who desires to spread Christianity in her pagan country. Thus, Swietoslawa is a remarkable heroine.

Overall, this novel is about ambition, sacrifice, and religion. I really liked all the characters in this novel. All these characters have ambitions that relate directly to Swietoslawa. The story is very well-written and it felt like medieval Scandinavia came alive. I also how the novel discusses the struggles of early Christianity in an age where the majority in Scandinavia are still pagans. However, there were a few drawbacks to this book. The Widow Queen is a very long book so there were some parts that were drawn out and incessant. The romance also felt forced and was not developed. It seemed to be built on teenage infatuation. Also, the names were hard to pronounce and could have benefited with a pronunciation guide. Despite these flaws, The Widow Queen was still an engrossing read! The Widow Queen is a mesmerizing page-turner that is full of political intrigue, action, and drama! I can’t wait to read the sequel, The Lost Crown! I recommend this to fans of Shadow on the Crown, The Norse Queen, and Thyra!