Before the Crown by Flora Harding: A Book Review 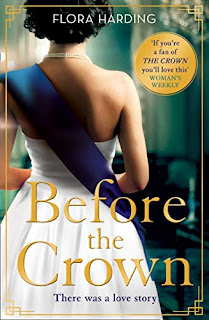 Before the Crown
Author: Flora Harding
Genre: Historical Fiction
Publisher: One More Chapter
Release Date: 2020
Pages: 401
Source: Netgalley/Publisher in exchange for an honest review.
Synopsis: Before the crown there was a love story.

As war rages across the world, Princess Elizabeth comes face to face with the dashing naval officer she first met in London nine years before.

One of the youngest first lieutenants in the Royal Navy, Philip represents everything she has always been taught to avoid. Instability. Audacity. Adventure.

But when the king learns of their relationship, the suitability of the foreign prince is questioned by all at court.

He is the risk she has never been allowed to take. The risk not even the shadow of the crown will stop her from taking…

Step through the palace gates and discover a captivating historical novel of royal secrets and forbidden love exploring the tempestuous courtship between Princess Elizabeth and Prince Philip in the wake of WWII.

My Review: Before the Crown tells the courtship story between Queen Elizabeth II and Prince Phillip. Princess Elizabeth has been in love with Phillip, a Greek prince and a Navy officer, since she was a little girl. Since their first meeting, she has been writing letters to Phillip. However, Phillip does not notice her until she performs in the play, Aladdin. This novel chronicles their enduring romance that would be their foundation to a successful marriage that would last decades.

Through many non-fiction books and documentaries, I have learned about Queen Elizabeth’s relationship with her husband Prince Phillip. As a fan of the tv show, The Crown, I was disappointed that they did not show the Queen’s courtship with Phillip. Thus, I was delighted when this historical fiction novel was released because it would focus on the Queen’s courtship. This novel did not disappoint. I admired Princess Elizabeth’s tenacity. She was a woman who fought for what she wanted. She was also a mature woman and knew the weight of the responsibility that comes from being the heir to a kingdom. Therefore, Elizabeth is truly an admirable woman. I also found Prince Phillip to be the most suitable match for Elizabeth. It is not easy to marry the heir of a kingdom. While Phillip was struggling with the responsibility of marrying the future queen of England, he nevertheless supported and loved Elizabeth. Thus, their romance was very sweet.

Overall, this novel gives an in-depth look at Queen Elizabeth’s early life. The characters seem very complex. The story is very well-written and meticulously researched! There were some scenes that I thought were unnecessary. Still, Before the Crown was a very short and simple story! I recommend this novel not only for fans of the tv show but also fans of the Royals! Fans of The Queen’s Secret, A Most English Princess, and The Other Windsor Girl will enjoy this novel! Before the Crown is the perfect novel to read during the Queen’s Platinum Jubilee!