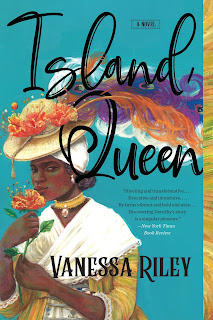 Island Queen
Author: Vanessa Riley
Genre: Historical Fiction
Publisher: William Morrow
Release Date: 2021
Pages: 586
Source: Netgalley/Publisher in exchange for an honest review.
Synopsis: A remarkable, sweeping historical novel based on the incredible true life story of Dorothy Kirwan Thomas, a free Black woman who rose from slavery to become one of the wealthiest and most powerful landowners in the colonial West Indies.

Born into slavery on the tiny Caribbean island of Montserrat, Doll bought her freedom—and that of her sister and her mother—from her Irish planter father and built a legacy of wealth and power as an entrepreneur, merchant, hotelier, and planter that extended from the marketplaces and sugar plantations of Dominica and Barbados to a glittering luxury hotel in Demerara on the South American continent.

Vanessa Riley’s novel brings Doll to vivid life as she rises above the harsh realities of slavery and colonialism by working the system and leveraging the competing attentions of the men in her life: a restless shipping merchant, Joseph Thomas; a wealthy planter hiding a secret, John Coseveldt Cells; and a roguish naval captain who will later become King William IV of England.

From the bustling port cities of the West Indies to the forbidding drawing rooms of London’s elite, Island Queen is a sweeping epic of an adventurer and a survivor who answered to no one but herself as she rose to power and autonomy against all odds, defying rigid eighteenth-century morality and the oppression of women as well as people of color. It is an unforgettable portrait of a true larger-than-life woman who made her mark on history.

My Review: Island Queen tells the story of Dorothy Kirwan Thomas, a slave who eventually rose to become one of the most powerful landowners in the Caribbean Islands during the Colonial era. Dorothy was the daughter of a landowner and a slave. Eventually, she buys her freedom as well as her mother and sister from her father. She then proceeds to build an empire from the ground up. This novel also chronicles her romances as well as her success.

From the moment when we first meet her, Dorothy is an ambitious woman. She dreams of purchasing her freedom and has an interest in business. She begins to learn the ropes of business at an early age. Dorothy is also a survivor. She is not afraid to do what is necessary to survive. She has had a tragic life. Yet, she never lets her past bring her down. Most of her knowledge comes from her experiences. Thus, Dorothy is a hard working woman who is persistent in gaining her success. Thus, she is an admirable character.

Overall, this novel is about choices, ambition, and perseverance. The message of the novel is to not let anyone stop you from pursuing your dreams. Dorothy came from the bonds of slavery and became one of the wealthiest woman in the Caribbean. Aside from Dorothy and her sister, I thought all the characters were very flat and typical. While it was a long book, there were many scenes that were rushed and others that dragged. Dorothy’s romances consisted of most of the book, which disappointed me because I wanted to focus more on her entrepreneurship. Still, Island Queen enlightened me on an extraordinary woman that I knew nothing about. I am very interested to learn more about Dorothy Kirwan Thomas’s fascinating life. I recommend this for fans of The Great Mrs. Elias, The Yellow Wife, and Daughter of a Daughter of a Queen!