A Betting Woman: A Novel of Madame Moustache by Jenni L. Walsh: A Book Review 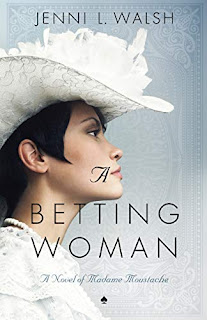 A Betting Woman: A Novel of Madame Moustache

Synopsis: Born Simone Jules, reinvented as Eleanor Dumont, and largely remembered as Madame Moustache, A Betting Woman is a historical novel inspired by the tumultuous life, times, and loves of America's first professional croupier of modern-day blackjack, bringing to life an intrepid and entrepreneurial real-life woman who lived on her own terms.

When her whole family dies in a fire, young Simone Jules flees her grief and travels west to reinvent herself in burgeoning San Francisco. Down to her last dollar and facing some unsavory options, Simone quick-wits her way to a gambling table where she begins to deal vingt-et-un - modern-day blackjack. Word travels fast among of this French-speaking, card-playing novelty, and she begins to build a new life for herself.

Fans of Thelma Adams, Therese Anne Fowler, and Marie Benedict will root for the quick-witted, charming, and self-sufficient Eleanor as she paves her way in a man's world and into the pages of history.

My Review: The author of Becoming Bonnie has penned a tale of another infamous woman, Eleanor Dumont, known as Madame Moustache! Madame Moustache is known as the first female blackjack dealer. When Simone’s family dies in a fire, she flees to San Francisco. Harsh circumstances force Simone to play what is known as blackjack. Simone re-invents herself as Eleanor Dumont to open her own gambling parlor. Thus, Simone has to navigate herself through a male dominated game to become successful in the field of blackjack.

I had never heard of Madame Moustache previously, so this novel was really enlightening. I found it interesting that she got her nickname because she had a hairline on her upper lip. I found Simone Jules to be a survivor. She went through many tragedies but endured. She started out being very naive, but gradually became wiser. There were a few of her actions that I thought were a bit shady, and some of her decisions I did not agree with. Thus, Simone was a very complex character. She used her intelligence, ambition, and ruthlessness to become successful.

Overall, this novel is an in-depth psyche of a larger than life woman. Besides Simone, I thought the other characters were not developed enough. The story is told at an even pace. However, the novel became repetitive. The romance was not my favorite because it was not developed enough, and I found it to be unnecessary. Still, I like how the author showed us the gritty San Francisco underbelly during the Gold Rush. A Betting Woman does a fascinating job in portraying the struggles of a woman in a male dominated society. I recommend this for fans of Gold Digger: The Remarkable Life of Baby Doe Tabor, Crown of Dust, and Daughter of Joy!