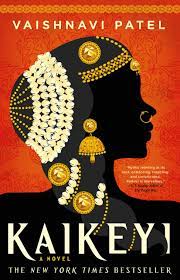 Kaikeyi
Author: Vaishnavi Patel
Genre: Historical Fiction, Fantasy
Publisher: Redhook
Release Date: April 26, 2022
Pages: 497
Source: Netgalley/Publisher in exchange for an honest review.
Synopsis: "I was born on the full moon under an auspicious constellation, the holiest of positions - much good it did me."

So begins Kaikeyi's story. The only daughter of the kingdom of Kekaya, she is raised on tales of the gods: how they churned the vast ocean to obtain the nectar of immortality, how they vanquish evil and ensure the land of Bharat prospers, and how they offer powerful boons to the devout and the wise. Yet she watches as her father unceremoniously banishes her mother, listens as her own worth is reduced to how great a marriage alliance she can secure. And when she calls upon the gods for help, they never seem to hear.

Desperate for some measure of independence, she turns to the texts she once read with her mother and discovers a magic that is hers alone. With this power, Kaikeyi transforms herself from an overlooked princess into a warrior, diplomat, and most favoured queen, determined to carve a better world for herself and the women around her.

But as the evil from her childhood stories threatens the cosmic order, the path she has forged clashes with the destiny the gods have chosen for her family. And Kaikeyi must decide if resistance is worth the destruction it will wreak - and what legacy she intends to leave behind.

My Review: In Ramayana, Kaikeyi is portrayed as the wicked stepmother who forced Rama, the worthy heir-apparent of Ayodhya, into exile for fourteen years in order to make her own son king. This novel retells the epic from Kaikeyi’s perspective. Kaikeyi is a princess of Kekeya. She had an arranged marriage to King Dasharatha of Ayodhya. This novel tells the tale of how Keikeyi was an excellent queen who loved her people and why she exiled her step-son.

When Kaikeyi was released, I was ecstatic to read it. I have been familiar with the Ramayana, and I wanted to see how the author would make Kaikeyi sympathetic. I have already read Shadows of the Sun Dynasty which is a retelling of the epic also from Kaikeyi’s view so I wanted to see another author’s take on it. In this novel, Kaikeyi is a lovable, relatable, and strong heroine. Kaikeyi shows different aspects of the infamous queen. She is a sister, a dutiful princess, a wife, a fierce warrior, a wise queen, and, above all, a mother. She relentlessly fights for women’s rights. She wants what’s best for her children. She feels that exiling Rama is what is with him even though she risks losing all those she loves. Even though Kaikeyi is beloved and respected, she is willing to lose everything to fight for what she believes to be right. Thus, Kaikeyi is strong throughout the novel because she never stopped being true to herself and her beliefs. Therefore, Kaikeyi was a very fascinating and complex character.

Overall, this novel is about justice, family, and decisions. Many of the characters are one-dimensional. The characters fall into two categories. Those that love the heroine are good, and those that hate the heroine are bad. Another disappointment is that the novel portrays Rama as the villain to justify Kaikeyi’s actions. I did not think this was necessary to change Rama’s character. Therefore, Shadows of the Sun Dynasty did not change Rama’s personality to make Kaikeyi sympathetic. In that novel, Kaikeyi was portrayed as insecure and afraid for her future. I thought Shadows of the Sun Dynasty was a superior version from Kaikeyi’s perspective because they kept the characters true to the epic and both were sympathetic. Therefore, I suggest if you do not want to read this book where Rama is portrayed in a negative light, then read Shadows of the Sun Dynasty instead. Despite these drawbacks, Kaikeyi is still a very engrossing read. The writing is very lush and lyrical that made ancient India come alive. Kaikeyi moves at a fast pace and is a feminist take on the epic! I recommend this for fans of The Forests of Enchantments, Sita’s Sister, and Ahalya!

This is a video of Vaishnavi Patel discussing her novel, Kaikeyi: