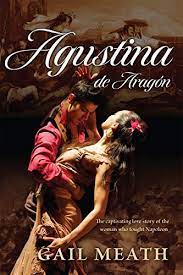 Agustina de Aragon
Author: Gail Meath
Genre: Historical Fiction
Publisher: Gail Meath
Release Date: 2021
Pages: 198
Source: Netgalley/Publisher in exchange for an honest review.
Synopsis: Her story is so much more than a tale of war, tremendous courage, and loss. It is one of the greatest love stories in history. Based upon a true Spanish heroine.

Barcelona, Spain, 1803. Agustina Saragossa, the youngest daughter of a bladesmith, sneaks around the military barracks, yet not to snag a husband as everyone thinks. Stubborn, hot-tempered and fiercely devoted to her country, like her grandfather before her, she is far more interested in learning about the ensuing war between Britain and France than the lazy, arrogant Spanish soldiers at the compound.

When Sergeant Juan Roca, a handsome officer with a troubled past, is relocated to the barracks, he is instantly struck by Agustina’s beauty and fiery spirit. Despite her heated rejections and open mistrust, he relentlessly pursues her. Will he ever win her heart?

As the war progresses between their neighboring countries, Napoleon Bonaparte deviously orders the invasion of Spain, thinking it will be an easy task. But Agustina and Juan join the fight first as guerillas, then soldiers in their valiant effort to crush the enemy and regain the freedom of their country.

A dynamic and heartfelt story based upon true events that takes place during one of the most devastating wars in Europe. It captures the strength of unity and family and is known as one of the most powerful love stories in history.

My Review: Agustina de Aragon was a Spanish heroine who fought in the Peninsular War. She was a civilian but through her bravery became an officer in the Spanish army. This historical novel tells the love story between Agustina and her first husband, Juan Roca, a Spanish military officer. Agustina is the daughter of a blacksmith. One day she meets Juan Roca and initially takes a dislike to him. Yet, the more she gets to know him the more she likes him. The two marry and are happy until the French invade their country. Agustina is willing to do anything to protect her country and her husband.

Agustina is a fascinating woman. She has gained the admiration of the Spanish people for centuries. However, this book does not develop Agustina fully. This is because the novella tells Agustina’s story in a passive voice. Most of the novella was written like a dry textbook. Therefore, I could not connect with Agustina or feel any of the emotions she was going through. She was patriotic and a devoted wife. She was very courageous to fight in a battle to protect her home and those she loved. Yet, I had no reaction to her story.

Overall, this novella is about patriotism, courage, and love. The characters are pretty stereotypical. Yet, most of the story was slow moving and was very dry. I think it would have been better if this was a nonfiction work on Agustina. Nevertheless, Agustina de Aragon was a very short and easy read. I had never heard of Agustina before, and it did open my eyes to a bold and courageous woman. Her story is very admirable, and I am interested in researching more about her. I recommend this for fans of The Girl who Fought Napoleon, Tides of War, and The Last Campaign of Marianne Tambour!