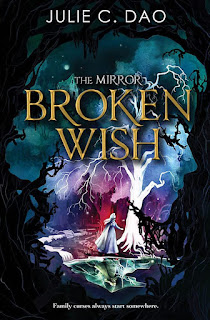 Synopsis: Sixteen-year-old Elva has a secret. She has visions and strange powers that she will do anything to hide. She knows the warnings about what happens to witches in their small village of Hanau. She's heard the terrible things people say about the Witch of the North Woods, and the malicious hunts that follow.

But when Elva accidentally witnesses a devastating vision of the future, she decides she has to do everything she can to prevent it. Tapping into her powers for the first time, Elva discovers a magical mirror and its owner-none other than the Witch of the North Woods herself. As Elva learns more about her burgeoning magic, and the lines between hero and villain start to blur, she must find a way to right past wrongs before it's too late.

The Mirror: Broken Wish marks the first book in an innovative four-book fairy-tale series written by Julie C. Dao, Dhonielle Clayton, Jennifer Cervantes, and L. L. McKinney, following one family over several generations, and the curse that plagues it.

My Review: Agnes and Mathilda are friends. Because Mathilda is a witch the whole town is against her, and Agnes begins to be swayed by the town’s prejudices of Mathilda. One day Agnes decides to use and betray Mathilda for her own ends. Seventeen years later, Agnes' daughter, Elva is gifted with magic. Elva asks Mathilda to be her teacher. Mathilda instructs Elva on how to control her magic.

In Broken Wish, Elva is the main character in the story. However, I was disappointed with Elva’s development in the story. Elva is optimistic and believes in the goodness of everyone. She loves her friends and her family. Throughout the novel, Elva seemed very perfect and did not have any flaws in the novel. She was a Mary Sue throughout the book. I did not find her a compelling figure.

Mathilda was the most interesting, but she too had very little development. The reader knows that she has been ostracized and misunderstood. However, I found it a little odd that she very quickly takes Agnes’s daughter as an apprenticeship despite her friend’s betrayal. Her actions did not make any sense. I did like that she had an aura of mystery about her. Thus, Mathilda had the most potential in the novel but failed.

Agnes also had little personality. I never understood why Agnes is afraid of her daughter having magic since she uses it to benefit herself. The story also keeps constantly mentioning that Agnes regrets her betrayal but there are no scenes to show that she does regret it. I also did not understand why Agnes is described as kind, but she seemed to be selfish and mean. She used others for her own ends and did not seem to regret it. Thus, Agnes was a character who did not match the novel’s description of her.

Overall, this story is about friendship, family, and forgiveness. The message of the story is to not be afraid to let others into your lives and to accept help when it is needed. The characters are one-dimensional. The stereotypical villains seem to have no relevance in the plot and could have been deleted from the story. There were no vivid descriptions of the setting of the German town of Hanau. If it wasn’t for the name, I kept forgetting it was set in Germany because it could have been set in any European country with its vague details of the setting. The historical details of Germany in the 1860s were also touched upon, and I felt that the author did not do much research on the era or town she was writing about. The story moved at a slow pace. It was not until the last few pages that anything happened. Still, I like the fairytale elements in the story. Broken Wish had a lot of potential, but it just fell flat. It would have worked better as a short story or a novella. I recommend Broken Wish for fans of Allerleirauh, The Healer’s Apprentice, and The Fairytale Keeper!