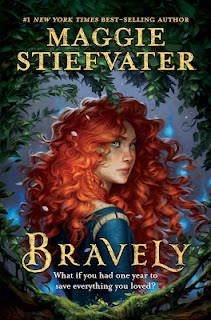 Bravely
Author: Maggie Stiefvater
Genre: YA Historical Fiction, Fantasy
Publisher: Disney Hyperion
Release Date: May 3, 2022
Pages: 384
Source: Netgalley/Publisher in exchange for an honest review.
Synopsis: What if you had one year to save everything you loved?

ONE PRINCESS. Merida of DunBroch needs a change. She loves her family—jovial King Fergus, proper Queen Elinor, the mischievous triplets— and her peaceful kingdom. But she’s frustrated by its sluggishness; each day, the same. Merida longs for adventure, purpose, challenge – maybe even, someday, love.

TWO GODS. But the fiery Princess never expects her disquiet to manifest by way of Feradach, an uncanny supernatural being tasked with rooting out rot and stagnation, who appears in DunBroch on Christmas Eve with the intent to demolish the realm – and everyone within. Only the intervention of the Cailleach, an ancient entity of creation, gives Merida a shred of hope: convince her family to change within the year – or suffer the eternal consequences.

THREE VOYAGES. Under the watchful eyes of the gods, Merida leads a series of epic journeys to kingdoms near and far in an attempt to inspire revolution within her family. But in her efforts to save those she loves from ruin, has Merida lost sight of the Clan member grown most stagnant of all – herself?

FOUR SEASONS TO SAVE DUNBROCH – OR SEE IT DESTROYED, FOREVER.

My Review: Bravely is the sequel to Brave. On Christmas Eve, the Scottish god of destruction named Feradach seeks to destroy Merida’s kingdom. Merida makes a deal with two gods that Feradach will not destroy her home if she can improve her family within a year. Merida then embarks on a journey throughout Scotland to find ways to improve her family’s well-being. Can Merida succeed in her mission before it’s too late? As Merida continues her quest, she realizes that the person who has to change the most is herself.

I love Merida in the movie, Brave. She is a strong woman who has to learn the meaning of family. In Bravely, I could not connect with Merida. Merida stayed the same throughout the novel. She did not undergo any growth at all. She never seems to stop putting down her family and always complains when others try to teach her etiquette. She also seems to be very passive. There was no trace of the strong, mature, and confident young girl that she was in Brave. Rather, she seemed the complete opposite.

Overall, this story is about growth, family, and friendship. I was not invested in most of the characters. The only characters I thought were the most interesting were Elinor and the antagonist. The plot seemed very rushed, and this is probably why I thought the characters had no development. I think that if the plot slowly took its time for character development, I could feel the impact when they change their personalities and thoughts. Instead, I was indifferent. The romance also seemed to be forced and could have been eliminated. Still, I did like the setting and the mythological aspects of this novel. Thus, Bravely had a lot of potential but was not executed well. This novel will appeal to those who are fans of Brave. However, if you are fans of the movie and have not read this book, you are not missing out on much.