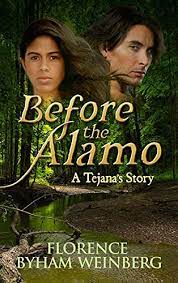 Before the Alamo
Author: Florence Byham Weinberg
Genre: Historical Fiction
Publisher: Maywood House
Release Date: 2021
Pages: 299
Source: Netgalley/Publisher in exchange for an honest review.
Synopsis: Emilia Altamirano, Tejana, half Native American, half Spanish, is the daughter of a Royalist officer who fought against Mexico's independence in the Battle of the Medina River. Growing up in Bexar de San Antonio, she becomes literate, is adopted as a ward of José Antonio Navarro, and acts as a page in the Ayuntamiento (City Council). She serves as a nurse in the Battle of the Alamo but survives to face an uncertain future.

My Review: Before the Alamo chronicles the events prior to the Battle of the Alamo from a tejana’s perspective, a Texan woman of Spanish descent. Emilia is the daughter of a wealthy Spaniard and a Native American slave. She becomes a ward to Jose Antonio Navarro, a Texas war hero. Jose teaches Emilia to read and write. Under his tutelage, she becomes a page for the City Council. She becomes a nurse during the cholera pandemic and later the Battle of Alamo. After the Battle of the Alamo, Emilia wonders about her future as the fate of Texas hangs in the balance.

Emilia is a likable character. Even though she was born into slavery and is illegitimate, she doesn’t let her circumstances define her. She is very hard-working and persistent. It is through her determination that she is able to win the admiration of those around her. Emilia is also a very intelligent character. She is well educated and puts her education to good use. She is also a strong and tenacious character. She goes through many hardships and is able to overcome them. Therefore, Emilia was a character I rooted for throughout the novel as I wanted her to find her own sense of belonging during tumultuous times.

Overall, this novel is about belonging, injustice, and war. All of the characters are very realistic. I really like Emilia’s mother and Jose Antonio Navarro. The novel does suffer from telling rather than showing. It also suffers from being told in a passive voice. Nevertheless, Before the Alamo is very well-written and meticulously researched. I like how it showed the conflicts and troubles that the inhabitants of Texas faced during that era. Before the Alamo is a moving and emotional novel of one girl’s fight for survival and justice! I recommend this for fans of The River Girl’s Song, News of the World, and True Women!