The Woman at the Front by Lecia Cornwall: A Book Review 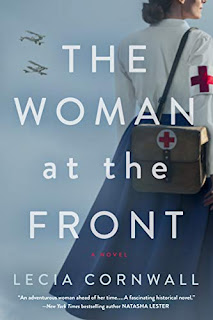 The Woman at the Front
Author: Lecia Cornwall
Genre: Historical Fiction
Publisher: Berkley
Release Date: 2021
Pages: 447
Source: Netgalley/Publisher in exchange for an honest review.
Synopsis: A daring young woman risks everything to pursue a career as a doctor on the front lines in France during World War I, and learns the true meaning of hope, love, and resilience in the darkest of times.

When Eleanor Atherton graduates from medical school near the top of her class in 1917, she dreams of going overseas to help the wounded, but her ambition is thwarted at every turn. Eleanor's parents insist she must give up medicine, marry a respectable man, and assume her proper place. While women might serve as ambulance drivers or nurses at the front, they cannot be physicians—that work is too dangerous and frightening.

Nevertheless, Eleanor is determined to make more of a contribution than sitting at home knitting for the troops. When an unexpected twist of fate sends Eleanor to the battlefields of France as the private doctor of a British peer, she seizes the opportunity for what it is—the chance to finally prove herself.

But there's a war on, and a casualty clearing station close to the front lines is an unforgiving place. Facing skeptical commanders who question her skills, scores of wounded men needing care, underhanded efforts by her family to bring her back home, and a blossoming romance, Eleanor must decide if she's brave enough to break the rules, face her darkest fears, and take the chance to win the career—and the love—she's always wanted.

My Review: Eleanor Atherton has graduated from medical school. She wants to be a respected doctor. However, many people do not take her credentials seriously because of her gender. Her opportunity arises when she is hired to go to the frontlines and become a personal for a British peer. Eleanor is determined to prove her skills that she is worthy of respect as a doctor.

Eleanor is a likable heroine. She constantly has to prove her worth in a field that is dominated by men. Because she is in a man's profession, she is often looked down upon and mocked. Her own family disapproves of her career choice and shuns her. Therefore, she does not have any close relationships with family. I found that Eleanor is a capable physician. She puts her patients first. There are times when she is put in a leadership role. This was my favorite part of the book because I like seeing her as a leader. Through her determination and skills, she is able to gain the respect and recognition she deserves. Therefore, I found her an admirable character, and I respected her a lot.

Overall, this novel is about a woman having to prove her worth in a male dominated field. It is also about the horrors of war. The characters all seem very realistic. There are a few drawbacks to the novel. I did not like that there were multiple men in love with our protagonist. This was very distracting in the novel because up until the end, the reader does not know who she will end up with. There were also side stories of some minor characters that seem to be unnecessary to Eleanor’s storyline. Despite these drawbacks, this was still a very well-written novel. A Woman at the Front is a dark and gritty novel that shows the harsh realities of war. Thus, A Woman at the Front is an engrossing read that puts readers into the frontlines of WWI. I recommend this for fans of Somewhere in France, Girls on the Line, and The Poppy Wife!