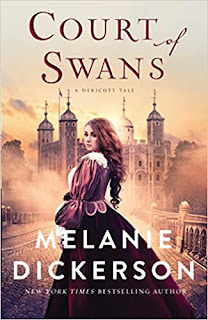 Synopsis: Where there is wealth and power, there’s always someone willing to do anything to take it. When Delia's father dies, her stepmother accuses her seven brothers of treasonous crimes. Seeking to free them from Richard II's grasp, Delia's only ally is Sir Geoffrey, the man who arrested them. Can she trust him?

England, 1381: Delia’s idyllic life as daughter of an earl is shattered when her father dies and his wife accuses Delia’s seven brothers of treason and murder. The youngest is only ten years old, but this doesn’t stop the guards from hauling them off to the Tower of London. There they await a grim fate, as child-king Richard II is executing anyone who poses a threat to his throne. Delia is their only hope for pardon and freedom.

Sir Geoffrey did not expect his first assignment as captain of the guard to be the arrest of boys so young. He dutifully imprisons the brothers, but he can’t ignore the feeling, rooted in personal experience, that injustice and treachery are at work.

Determined to rescue her brothers, Delia secures a position as a seamstress for the queen. Her quest is all but impossible as the executions continue. Sir Geoffrey offers to be her ally, but should she trust him in a court where everyone has an agenda?

From New York Times bestselling author Melanie Dickerson comes a tender retelling of “The Wild Swans,” where the virtues of loyalty and love face a harrowing showdown with power and fear.

My Review: Court of Swans is the first novel in the Dericott Tales, which is a new historical fiction fairytale retelling series set in England. In this novel, it retells “The Wild Swans” story. Delia’s brothers have been arrested in the Tower of London and are awaiting execution. In order to help her brothers, Delia becomes a seamstress to the queen. She finds romance in Sir Geoffrey who arrested her brothers. Can Delia and Geoffrey find a way to free her brothers?

I was excited to read Court of Swans since this was a departure from Mrs. Dickerson’s Hagenheim series. I was also curious to see how she would retell “The Wild Swans'' since it is one of my favorite fairytales. If it was done right,  this would be a very emotional and heart-wrenching retelling. Court of Swans started off to a promising start, but it quickly went downhill. The reason for this is because the story was rushed and Mrs. Dickerson did not spend much time focusing on her characters.

Delia is the main protagonist in this novel. At first, Delia starts off strong. She is a kind woman who loves her brothers. She is very naïve. I admired her courage to try to rescue her brothers no matter the personal cost. However, after she becomes a seamstress, she is very bland. She becomes a damsel in distress and has to be rescued by others. She is not the strong self-willed heroine from the original novel who through her own determination rescues herself from being burned at the stake. She was very easily manipulated. Her romance with Sir Geoffrey was also forced. There was no development in their romance, and I wondered why she was in love with him since he played a role in arresting her brothers. It seems the only reason she liked him was because of his looks instead of his personality. Thus, Mrs. Dickerson did not take the time to develop the characters or their relationship.

This novel is about family, hope, and faith. The message of the book is to believe in God because He will solve all problems. The characters are stereotypical. The villains are very cartoonish. The story starts out strong but dragged in the middle. It did pick back up pace within the last few pages. Thus, Court of Swans would have been a more enjoyable novel had Mrs. Dickerson more time developing the story instead of rushing to the final end. As a result, it had many flaws. Still, I am interested in reading the next installments of the Dericott Tales series because I am eager to learn what happens to Delia’s family. I recommend this novel for fans of Dauntless, Evermore, and Fated!