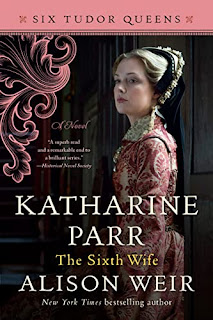 Katharine Parr: The Sixth Wife (Six Tudor Queens #6)
Author: Alison Weir
Genre: Historical Fiction
Publisher: Ballantine Books
Release Date: 2021
Pages: 544
Source: Netgalley/Publisher in exchange for an honest review.
Synopsis: Bestselling author and acclaimed historian Alison Weir brings her Tudor Queens series to a close with the remarkable story of Henry VIII’s sixth and final wife, who manages to survive him and remarry, only to be thrown into a romantic intrigue that threatens the very throne of England.

Having sent his much-beloved but deceitful young wife Katheryn Howard to her beheading, King Henry fixes his lonely eyes on a more mature woman, thirty-year-old, twice-widowed Katharine Parr. She, however, is in love with Sir Thomas Seymour, brother to the late Queen Jane. Aware of his rival, Henry sends him abroad, leaving Katharine no choice but to become Henry’s sixth queen in 1543. The king is no longer in any condition to father a child, but Katharine is content to mother his three children, Mary, Elizabeth, and the longed-for male heir, Edward.

My Review: Katharine Parr was the sixth wife of Henry VIII and England’s most married queen. The death of Katharine Parr’s second husband draws near. Katharine Parr is pursued by two suitors. The first is her love, Thomas Seymour. The second is the most powerful man in England, King Henry VIII. As Katharine is approaching widowhood, she wonders if she can sacrifice love for the good of her religion and country. Could Katharine be the queen who could help reform England under a turbulent reign?

Katharine Parr is a very likable and relatable heroine. She has a love of learning and often spends her free time on books. She is also passionate in the Protestant faith. It is through her Protestant religion that she is willing to give up love and be a passionate spokesperson on the faith. She is often very intelligent. She uses her intelligence to save herself. Katharine is also a very devoted stepmother, and often seeks to have her stepchildren educated. It is because she wants the best for her stepchildren from both marriages that they come to respect her. Every step Katharine makes, she is very careful. The only time I thought she was reckless was when it came to love. A month after Henry VIII died, she immediately married Thomas Seymour. In her fourth marriage, she made many mistakes. Still, Katharine Parr was devoted to her four husbands, stepchildren, siblings, and her religion.

The Six Tudor Queens as a whole have really been a delightful treat. For years, I have looked forward to reading about each of Henry VIII’s queens. Now that I am finished with the last queen, I am truly saddened because with each book, it felt like I was a visitor in Henry VIII’s court and each of these queens have been my friends. I have wept throughout their difficulties and tragedies. Therefore, finishing Katherine Parr: The Sixth Wife has been very bittersweet. Katharine Parr: The Sixth Wife is an excellent standalone. Yet, to truly love this book, you have to read the Six Tudor Queen series in order. Only then, can you truly appreciate this masterpiece series. The Six Tudor Queens is a must read for any Tudor fan! I recommend this novel for fans of Margaret Campbell Barnes, Carolly Erickson, and Laurien Gardiner!

This is a video of Alison Weir discussing her sixth book in the Six Tudor Queen series, Katharine Parr: The Sixth Wife: