The Next Ship Home: A Novel of Ellis Island by Heather Webb: A Book Review 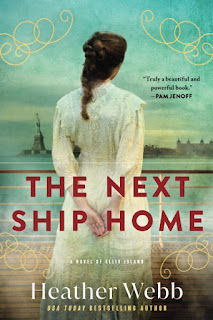 Synopsis: Ellis Island, 1902: Two women band together to hold America to its promise: "Give me your tired, your poor ... your huddled masses yearning to breathe free..."

A young Italian woman arrives on the shores of America, her sights set on a better life. That same day, a young American woman reports to her first day of work at the immigration center. But Ellis Island isn't a refuge for Francesca or Alma, not when ships depart every day with those who are refused entry to the country and when corruption ripples through every corridor. While Francesca resorts to desperate measures to ensure she will make it off the island, Alma fights for her dreams of becoming a translator, even as women are denied the chance.

As the two women face the misdeeds of a system known to manipulate and abuse immigrants searching for new hope in America, they form an unlikely friendship—and share a terrible secret—altering their fates and the lives of the immigrants who come after them.

This is a novel of the dark secrets of Ellis Island, when entry to "the land of the free" promised a better life but often delivered something drastically different, and when immigrant strength and female friendship found ways to triumph even on the darkest days.

Inspired by true events and for fans of Kristina McMorris and Hazel Gaynor, The Next Ship Home holds up a mirror to our own times, deftly questioning America's history of prejudice and exclusion while also reminding us of our citizens' singular determination.

My Review: The Next Ship Home tells the story of Ellis Island. Alma comes from a family of German immigrants. She is a linguist who gets a job working on Ellis Island. On her job, she meets Francesca, an immigrant who fled to America to escape her abusive father. Both Alma and Francesca want to make a better life for themselves. Can these women make their dreams come true despite the obstacles that lie in their path?

Francesca and Alma had potential. However, I found them to be very bland. I could not connect with their characters. They seem to be very beautiful and flawless. They are not complex and are stereotypical. The only downfall they have is that they come from abusive households. Both of them didn’t really seem to grow as characters. The only one who had more development was Francesca because she grows from a naïve woman full of dreams into a mature wise woman who is willing to fight for dreams. However, she comes across as mostly passive throughout the novel. Alma is the stereotypical outcast who doesn’t conform to society. She doesn’t grow from beginning to end. Their friendship also seems forced. Because they are not developed, II did not feel any emotion towards the hardships they were going through. Therefore, these characters had potential but remained passive and flat.

Overall, this novel is about dreams, hardships, and friendship. Ellis Island has always been seen as the promise of hope and freedom for Americans. However, in The Next Ship Home, this novel shows us the dark side of Ellis Island and the hardships immigrants faced in America. There is a lot of corruption on Ellis Island and it was not easy to get through the barriers and get off of Ellis Island. There were many ways an immigrant could be turned away. This novel also shows the racism and hardships that first-generation immigrants face once they settle into America. Therefore, it was an interesting look that shows the hardships of immigrants trying to get into America as well as those that are already in America. The downsides of this novel are the flat characters, the undeveloped romances, and a thin plot that was very drawn out. Still, The Next Ship Home is very meticulously researched and filled with lush descriptions. The setting is the book’s best feature. I recommend this for fans of Ellis Island, A Fall of Marigolds, and Grace’s Pictures! The Next Ship Homes is a fitting tribute to the many obstacles that immigrants have faced in coming to America.