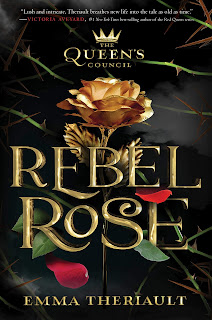 Synopsis: Happily ever after is only the beginning in this epic YA reimagining of the princesses as young rulers of their lands, aided by a mystical group of women called the Queen's Council, whose job it is to advise queens throughout history.

My Review: Rebel Rose is the sequel to Beauty and the Beast during the French Revolution. Belle is married to the Prince of Aveyon, a principality of France. When the French Revolution starts, the kingdom of Aveyon decides to break away from France and form its own kingdom. However, Belle does not want to be queen. Through a series of events, Belle realizes that accepting the queenship is the best gift for the newly formed kingdom.

The story takes place shortly after Belle marries the Beast. While Belle is happy marrying for love, she does not want to be a princess and refuses to have a title. She believes that being a princess and a queen will prevent her from having the freedom she has always dreamed. Throughout the novel, Belle slowly warms to the idea of being queen and to accept the responsibility of the title. In this book, Belle spends most of the novel being unsure of herself. It is only through the help of others that she is able to gain confidence and self-esteem.

Overall, this novel is about confidence, friendship, and responsibility. The message of the story is to believe in yourself. There are a few characters that I liked. However, the rest of the characters are stereotypical and have little depth. The story itself was very slow moving. The plot is thin and seems drawn out. Most of the action happens in the last pages. I also found it a bit odd that the reason why the witch turned the prince into a beast is not because of his selfishness and that he needed to learn a lesson, but solely to make Belle to enter his life and make her his queen. Still, I like the historical aspects of the novel and the rise of Belle becoming queen. This book is perfect for those who want to learn what happens after the ever after in Disney’s Beauty and the Beast! I recommend this for fans of As Old As Time, Belle, and The Merchant’s Daughter!