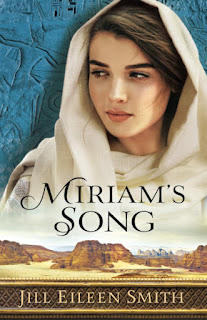 Miriam’s Song
Author: Jill Eileen Smith
Genre: Historical Fiction, Christian, Biblical Fiction
Publisher: Revell
Release Date: 2021
Pages: 406
Source: Netgalley/Publisher in exchange for an honest review.
Synopsis: In her eventful lifetime, Miriam was many things to many people: protective older sister, song leader, prophetess, leper. But between the highs and the lows, she was a girl who dreamed of freedom, a woman who longed for love, a leader who made mistakes, and a friend who valued connection.

With her impeccable research and keen eye for detail, bestselling author Jill Eileen Smith offers this epic story to fill in the gaps and imagine how Miriam navigated the challenges of holding on to hope, building a family in the midst of incredible hardship, and serving as a leader of a difficult people, all while living in her brother's shadow. Follow Miriam's journey from childhood to motherhood, obscurity to notoriety, and yearning to fulfillment as she learns that what God promises he provides--in his own perfect timing.

My Review: Miriam’s Song is a retelling of Moses from Miriam’s perspective. Pharaoh Thutmose I has ordered the killing of Hebrew baby boys. Miriam’s mother puts her son in the basket, and he floats down the Nile river. Miriam follows her brother and watches him being picked up by Hatshepsut who adopts him as her own. Events unravel as Miriam believes that Moses is God’s answer to her people’s freedom.

In the Bible, very few details are given about Moses’s sister, Miriam. Miriam’s Song makes Miriam a fully fleshed-out and complex character. As a slave, Miriam has a harsh life. However, her light is Moses. Since he was born, Miriam has watched Moses and was very protective of him. Miriam also has a close relationship with Aaron. Miriam is a very smart character, and she learns from her experiences. One of the most surprising elements in this novel that I didn't really expect was Miriam's romance. Miriam is a wife and a mother. I thought it was interesting because it was never mentioned in the Bible. Therefore, Miriam was a very admirable, courageous, and relatable woman.

Overall, this novel is about faith, freedom, and hope. The message of the book is that God always has a purpose. While I liked Miriam’s story, I did not particularly care for Moses and Zipporah’s chapters. I thought it detracted from Miriam’s story, and I did not think they were necessary. I did find it interesting that the author made Hatshepsut the Pharaoh's daughter.  While I am not convinced that Hatshepsut was in fact Moses’s adopted mother, I still found it a compelling storyline. Hatshepsut was shown as a woman who believed in justice and cared for her people. The writing is very lyrical and is filled with lush descriptions of ancient Egypt. While there are a few creative liberties taken with Miriam’s story, I found it to be a faithful retelling of Moses. Jill Eileen Smith has given a deeper look at an important but overlooked biblical figure. Miriam’s Song will delight readers of Mesu Andrews, Angela Hunt, and Tessa Afshar!