Love and Fury: A Novel of Mary Wollstonecraft by Samantha Silva: A Book Review 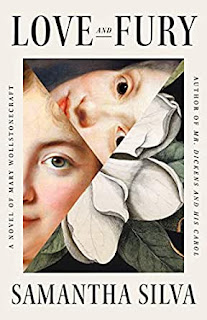 Love and Fury: A Novel of Mary Wollstonecraft
Author: Samantha Silva
Genre: Historical Fiction
Publisher: Allison and Busby
Release Date: 2021
Pages: 290
Source: Netgalley/Publisher in exchange for an honest review
Synopsis: 'Now, daughter, I'm to tell you a story to coax you into the world...'

London, 1797. Mary Wollstonecraft awaits the arrival of the midwife who will help bring her child into the world, and support her through the testing eleven days that follow.

After the birth, both mother and daughter fight for survival. Even as Mary's strength wanes, she urgently weaves the tale of her life to bind her frail Little Bird close.

Wollstonecraft's journey to vindicate the rights of women spanned Europe and broke the conventions of the time. Amid the triumph and loss, she blazed a trail and passed that legacy on to her child, the future Mary Shelley.

Love and Fury reclaims the all too brief moment when the stories of mother and daughter overlapped. It is a lyrical and moving tribute to an influential thinker and a remarkable woman.

My Review: Mary Wollstonecraft was known for being a feminine rights activist and for writing A Vindication of the Rights of Woman. In this historical novel, Mary has just given birth to a daughter, the future Mary Shelley. However, she never recovers from childbirth. As she lays dying, Mary Wollstonecraft remembers her life that consists of many sorrows. Through each sorrow, she finds a determination to live.

Mary Wollstonecraft has suffered through many hardships. These hardships have shaped her beliefs on women’s rights. She comes from an abusive family and has a passion for book learning. Because she is a woman, few prospects are open to her. She strives to find a way to break through these barriers and vows to never marry. Mary has always been a champion for women’s rights. She first opens a school for girls. Then, she turns into a governess herself. Later, she has discourses with philosophers and writers about women’s rights. and frequently writes. She was a very admirable woman. The only thing I thought she was weak at was her love for Gilbert Imlay. She clings to him even though he made it obvious that he is no longer interested in her. Still, I found her to be a sympathetic character and pitied her woes.

Overall, this book is about hardships, feminism, and freedom. The message of the book is that God is there for you throughout the good times and the bad times. The story is mostly told in first person through Mary’s perspective with some chapters from her midwife, Mrs. B’s, perspective. I found the characters to be very fascinating. A few things that I did not like about this novel was that I thought it ended abruptly. It did not discuss how Mary came to marry her husband William Godwin. I thought it strange that the novel discussed the motivation for why a woman who vows never to marry and to suddenly settle for marriage. I would have liked the novel to go into detail about Mary’s courtship and marriage. Thus, the novel felt incomplete. I also thought Mrs. B to be an unnecessary narrator, and rather preferred the story to be told solely by Mary. Still, this novel illuminates the life of a famous feminist. Many novels have focused on Mary’s daughter, Mary Shelly. It was time that the spotlight shone on Mary Shelley’s mother, Mary Wollstonecraft! I recommend this novel for fans of Vindicated, The Determined Heart, and Almost Invincible!